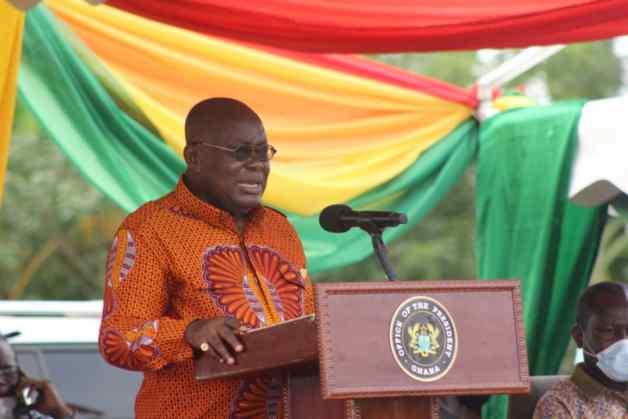 An estimated US$400 million or more is expected to be used to address the ravaging Cocoa Swollen Shoot Virus Disease (CSSVD), and overaged or moribund cocoa farms, which have significantly affected the country’s cocoa production for some time now.

According to the Ghana Cocoa Board (COCOBOD), about 40 percent of Ghana’s cocoa farms are diseased, overaged or moribund. This is attributed to data gathered in a resurvey programme conducted from 2006 to 2017.

Out of a total of 1,913,166.30 hectares of cocoa farms surveyed, 315,886.06 hectares of outbreak were discovered. It emerged that 17 percent of the cocoa area surveyed was affected by the disease while over 23 percent of the total cocoa tree stock was overaged [over 30 years].

In response to these developments, the President, Nana Addo Dankwa Akufo-Addo, said the government has taken steps for COCOBOD to secure US$600 million receivable-backed syndicated loan facility.

“More than two-thirds of the amount will directly go into rejuvenation of diseased and overaged farms, productivity enhancement activities including pruning and hand pollination and irrigation of cocoa farms,” he said, adding that the remaining amount will go to support local processing and value addition, and promotion of local consumption of cocoa products.

Addressing farmers at the launching of the National Cocoa Rehabilitation Programme, at Sefwi Wiawso, in the Western North Region, he said the government sees the CSSVD infestation and spread as a national disaster. “If today their livelihoods are down by the ravages of CSSVD, then it is right and just that the entire country rises up to the occasion to support them back onto their feet. This is my conviction, and this is exactly what I am doing,” he said.

He said the government is resolved to replant all CSSVD affected farms in all the regions of cocoa cultivation and held improve the yield per hectare for all cocoa farmers. To this end he indicated that the modalities of the cocoa rehabilitation programme have already been outlined. Accordingly, farmers whose farms have been affected by the diseases, he said, would be compensated.

The President also noted that 11,564.28 hectares of CSSVD affected farms in the Western North and Eastern regions have been treated and planted to cocoa, plantain and economic shade trees. This involves 8,904 farmers out of which 7,358 have been fully compensated. He assured that every single cocoa farmer involved would be fully paid.

The National Cocoa Rehabilitation Programme therefore seeks to help increase and sustain cocoa production in Ghana through cutting and replanting of old and diseased cocoa trees.

The programme among others seek to assist farmers to achieve higher productivity in the rehabilitated farms, and encourage farmers to replant moribund and CSSVD treated farms with hybrid cocoa variety which is high yielding, disease tolerant and early bearing. It also seeks to encourage farmers to adopt best agronomic practices and medium to high farming technologies through backup efficient extension service delivery.

Minister of Food and Agriculture, Dr. Owusu Afriyie Akoto, acknowledged that the positive impact of the various productivity enhancement initiatives of COCOBOD have provided enough assurance of significantly rising production in the coming years.

“Apart from sustaining the cocoa industry in the future, the programme is creating thousands of jobs for the youth in affected rural communities, and the supply of food particularly plantain and other staples onto our markets and for export.”

Dr. Akoto Afriyie said MoFA is working with COCOBOD to ensure that the country’s over-reliance on cocoa becomes a thing of the past. Currently, modalities are being fashioned out in line with the Tree Crop Policy, to ensure that other tree crops are also given sustained attention and support, he added.

Chief Executive of COCOBOD, Joseph Boahen Aidoo, also speaking at the ceremony said all these unprecedented initiatives by the government affirms the determination of the government increase cocoa productivity. He was hopeful that all these initiatives would be supported by the farmers to make it successful.