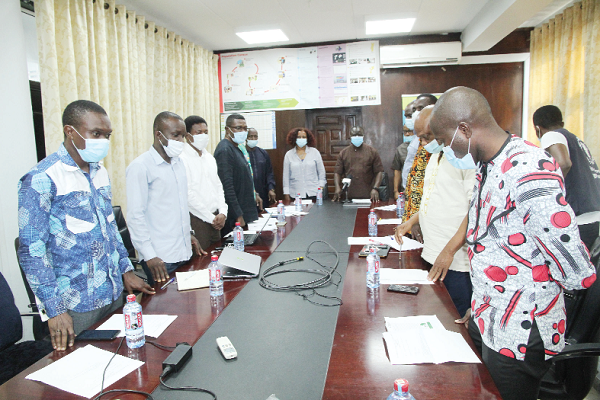 The Ghana Statistical Service (GSS) has launched the 2020 Comprehensive Food Security and Vulnerability Assessment (CFSVA) Technical and Steering committees to gauge and measure the extent of food insecurity in the country.

The assessment will also help identify ‘hot spots’ of food and nutrition insecurity in the country and the districts that are lagging in improving food security and reducing malnutrition.

The committees are expected to present their report by March 2021 to guide policy makers in fashioning out food and nutrition programmes.

Inaugurating the committees in Accra, the Government Statistician, Professor Samuel Kobina Annim, said the CFSVA report would guide the government to understand the prevailing condition of food security in the country.

“The data generated will provide the basis for reviving the quarterly Food and Nutrition Monitoring System,” he said.

“The report will also help us to identify areas that are vulnerable to food insecurity so that contingency programmes can be targeted at them,” he said.

The 11-member committee that will be chaired by Ms Abena Osei-Akoto of the Ghana Statistical Service (GSS) will map out areas and people who are moderately or severely food insecure in Ghana and analyse the underlying causes of food insecurity.

Other members of the committee are Mr Peter Takyi Peprah, who is also from the GSS and the project consultant, Mr John Notey of the Ministry of Food and Agriculture (MOFA), Mr Godsway Banini also of MOFA and Mr John Sitor (WFP).

The rest are Mr Jefferson Attipoe of the Food and Agriculture Organisation (FAO) and Mr Williams Massaoud, the International Consultant.

Country Director for World Food Programme, Ms Rukia Yacoub, said Ghana had made strides in reducing malnutrition, hunger and food insecurity in the past two decades.

She also commended the country for meeting the UN Millennium Development Goal One by reducing poverty by over 50 per cent.

But analysis by the United Nations Development Programme (UNDP) indicates that even before the onset of the COVID-19 pandemic, inequality was on the rise and was therefore undermining the poverty reduction effort and holding back economic growth.

In 2015, the country was recognised for its success in reducing hunger from seven million in the early 1990s to fewer than one million.

The country also became one of the 72 countries that reduced those suffering from hunger to less than five percent of the population.

The survey is therefore expected to tackle the challenges of food security and map out strategies to address systemic inequalities.