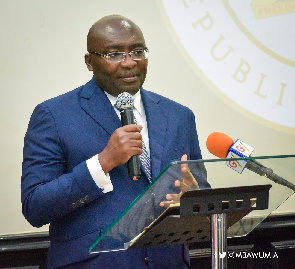 The Vice-President, Dr. Mahamudu Bawumia, has charged state agencies whose mandate have a direct impact on businesses and investments to implement reforms that will help improve the country’s ease of doing business. The World Bank ranked Ghana 114th out of 190 countries in the world and 14th in sub-Saharan Africa in its latest ease of doing business ratings.

The latest ranking means that Ghana has moved six places up from the 2018 ratings that saw the country place 120th.

However, speaking at a national stakeholders’ meeting on reforms by the government to further improve ease of doing business in Accra yesterday, the Vice-President said although the country had made some gains, more work needed to be done to consolidate the gains and make Ghana the preferred destination for investors.

“The reasons behind the improved performance in the ease of doing business in 2019 are improvement in trading across borders through the implementation of the paperless customs clearance system, construction permits that strengthen construction quality controls and improvement in paying taxes.

“But we only moved up by six places; meanwhile the ranking is very competitive and all countries are reforming their operations to do well. So if we go to sleep, others will overtake us,” he said.


The meeting brought together officials from ministries, departments and agencies (MDAs), such as the Ghana Revenue Authority (GRA), the Ghana Export Promotion Authority (GEPA), the Registrar-General’s Department, the Judicial Service and some private sector players.

The meeting was meant to appraise the reforms being taken by the agencies to improve service delivery to help improve the business environment.

The MDAs made presentations on how they were reforming to deliver on their mandates.

Dr. Bawumia said the marginal improvement in the country’s ease of doing business was a reflection of the strategic steps the government had taken to digitise access to public services and formalise the economy.

He said there was an urgent need for MDAs to make conscious efforts to implement more reforms to ensure that obstacles to business development were removed to boost investor confidence in the country.

That, he said, required that state institutions moved away from the manual processes in delivering services to electronic platforms that would reduce human interfaces and reduce corrupt practices.

He said the manual system did not only make service delivery more cumbersome but also increased the turn-around time and discouraged the business community from doing business.

For instance, he asked the Customs Division of the GRA to take steps to reduce the manual examination of cargo at the ports, since that process was counter-productive.

“Information available to me shows that 90 per cent of containers coming in are still being physically examined, but it also translates into a revenue gain of about 0.38 per cent.

“There is the need to move towards the use of scanners and risk engines to reduce the stressful exercise of bringing the cargo out and refilling it.

“If we use the risk engine and it shows green, we should allow the containers go, so that we reduce physical examination to about 10 per cent as soon as possible,” he said.

He commended the MDAs, especially the GRA, the Registrar-General’s Department and the Judicial Service, for starting processes to reform their operations.

For his part, Mr. Osafo-Maafo said there was the need for a concerted effort to consolidate the marginal gains in the ease of doing business by removing obstacles that hampered the growth of the private sector.

He said the document on reforms for improved service delivery that was developed by the previous government had been reviewed to include the private sector, with a view to making the private sector the real driver of growth.

He, therefore, urged the various public sector agencies to play their facilitation role well, so that the private sector would be empowered to grow its businesses and create jobs.

Mr. Osafo-Maafo urged members of the public to show a sense of patriotism by fulfilling their tax obligations and also supporting reforms aimed at transforming the economy.