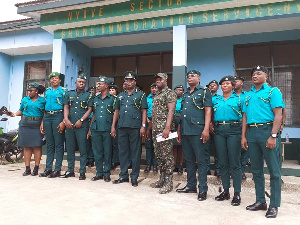 The Comptroller General of the Ghana Immigration Service, Mr Kwame Asuah Takyi, has directed regional and sector commanders of the service to intensify patrols especially along unapproved routes in a bid to contain potential terrorism and other security threats.

He said the increasing threats of terrorism, drug trafficking, human smuggling and trafficking, cyber crime and money laundering, among others, in the sub region and even globally demanded the tightening of the country’s borders.

Records indicate that Ghana has 42 approved borders, comprising 36 minor borders, two seaports and four major borders, including one airport. But there are also a number of illegal routes along Ghana’s borders supposedly patronised mainly by smugglers and other criminals.

Speaking at a GIS regional commanders’ meeting in Accra on ‘Strategising to combat emerging national and sub regional security threats’, Mr Asuah Takyi said it was important for the GIS to expand its operations to boarder communities as part of efforts to combat terrorism.

“Immigration controls are primarily security operations aimed at regulating the movements of people in and out of the country.

Presently, the objective is to secure the country against threats in whatever forms, whether physical, health, environmental, social or economic,” he said.

To achieve that, he said, it would be important to screen travelers thoroughly to identify and assess the personality, the purpose of travel, and possible criminal records, among others.

The Minister for the Interior, Mr Ambrose Dery, also reiterated the need for the regional commanders of the GIS to be extra vigilant and to step up their operational protocols to identify and counter terrorism threats.

He said the effort to counter terrorism had assumed a top security concern as terrorism had become the greatest threat within the West African sub-region currently.

He said the recent terrorist attacks in Burkina Faso and other parts of the sub region must be a wake-up call.

“We cannot pretend that all is well and take the peace of our country for granted,” he said.

Indeed, in the past three years, the likes of Burkina Faso, Cote D’Ivoire, Niger and Nigeria have been among the worst hit by terrorism in the sub region that had claimed lives of both civilians and military personnel.

“The time to call for close collaboration among security services and civil society organisations and the adoption of coordinated approaches in preventing and countering terrorism in Ghana is here and now,” he said.

Terrorism, Mr Dery said, transcended national borders, and called for regional action, saying “we should, therefore, nurture a strategy to work with our neighbours, especially the border agencies, to share information on travelers and suspects”.

He said government was committed to provide the needed support to ensure that the GIS worked more effectively and efficiently to prevent terrorism.