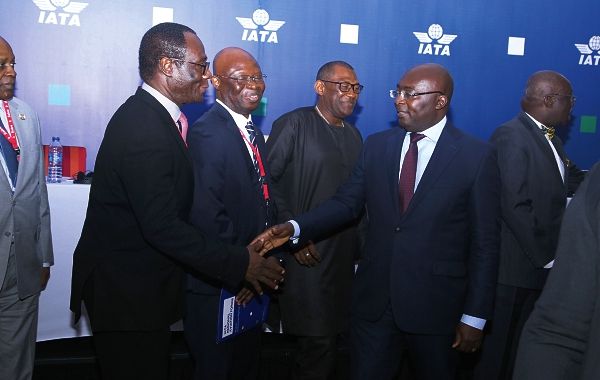 The Vice-President, Dr Mahamudu Bawumia, has charged stakeholders in the aviation industry to collaborate and work to minimise air transport fares, as well as improve connectivity, within the sub-region.

To that end, he has also called for the strengthening of coordination and harmonisation in regional policies.

Dr Bawumia made the call when he addressed the opening session of a two-day regional forum for members of the International Air Transport Association (IATA) held in Accra yesterday.

While stressing the dual problem of air fares and interconnectivity, he said: “We are not going to tackle these challenges with any finality in one forum but let us advance ourselves a bit further in coming up with solutions.”

“Going forward, the forum must provide the pathways to addressing these problems with the urgency that they deserve.

Our progress in the aviation sector will never be sustained if we do not work together,” he added.

The two-day regional forum, organised by the IATA, with support from the Ghana Civil Aviation Authority (GCAA), is on the theme: “Aviation: Business for regional prosperity.”

It is being attended by director-generals (DGs), chief executive officers (CEOs) and other partners in the aviation sector from across the sub-region.

The Vice-President said the continent was making very slow progress in the aviation sector and so it was time members committed themselves to making sure that the Continental Free Trade Agreement was given real meaning in the area of air traffic.

To achieve that, he stressed the need for member countries to collaborate to eliminate unhealthy fragmentations to minimise excessive regulation and protection of country airlines.

While emphasising the need to safeguard the aviation industry at all times, Dr Bawumia said: “We have shown commitment in this direction by investing over $7 million to install three new navigational equipment to boost safety and security in Ghana’s air space.”

The equipment, he explained, included a Very Small Aperture Terminal (VSAT) system, Air Traffic Management systems (ATMs) and Very High Frequency Radio systems (VHFRs) which were expected to further facilitate the air navigation service provision of the GCAA and ensure that safety was commensurate with the expansion in aviation infrastructure across the country.

He urged all member countries to cooperate to combat emerging security threats in the sub-region, since safety and security could adequately be guaranteed through the sharing of information, as well as adhering to regulation standards in the industry.

The Vice-President expressed hope that the forum would come up with well-thought-out strategic solutions for the growth and development of the aviation industry.

Highlighting Ghana’s contribution to the growth and development of the industry, Dr Bawumia said: “We are coupling our domestic air travel development with an overall public infrastructure investment in roads and railways.”

Those, he said, had led to the introduction of domestic operators such as Unity Air and Passion Air, in addition to the existing African World Airlines (AWA), while others were going through processes for their certification.

“We have also seen massive improvement in connectivity by revamping operations at the Kumasi, Tamale and Takoradi airports.

The completion of the Kotoka International Airport Terminal Three and other upcoming ones is expected to play a major role in socio-economic development,” he stated.

The Vice-President said work was also in progress for the construction of phases two and three projects at the Kumasi Airport as part of strategies to transform the airport into an international airport.

Additionally, he said, the government would cut the sod for the construction of phase two of the Tamale Airport expansion project, adding that Ghana had made progress with its engagements with a number of partners to relaunch the home-based carrier.

“It is gratifying to announce that the flag of Ghana will soon fly again, as we have advanced engagements with a couple of partners to launch our home-based carrier.

This is part of the hub vision to ensure that Ghana’s aviation industry grows to become the centre to provide regional and intercontinental flights within the West African sub-region,” Dr Bawumia stated.Other speakers

The Vice-President of IATA in charge of Africa and the Middle East, Mr Muhammad Ali Abakri, for his part, said the aviation industry was the key to unlocking prosperity on the continent, particularly as the sector played a central role in achieving 15 out of the 17 Sustainable Development Goals (SDGs).

He also brought to the fore some of the challenges confronting the industry in the sub-region, such as high ticket prices, poor intra-African connectivity and the proliferation of taxes and charges, and called on members to proactively take action to improve the trend.

The Director-General of the GCAA, Mr Simon Allotey, said the forum fell within the objectives of the GCAA and pledged the resolve of the authority to maintain the highest aviation standards.

He expressed disappointment at the rate of aviation accidents in Africa and expressed the hope that five years from now safety and security performance indicators would be above the global average.