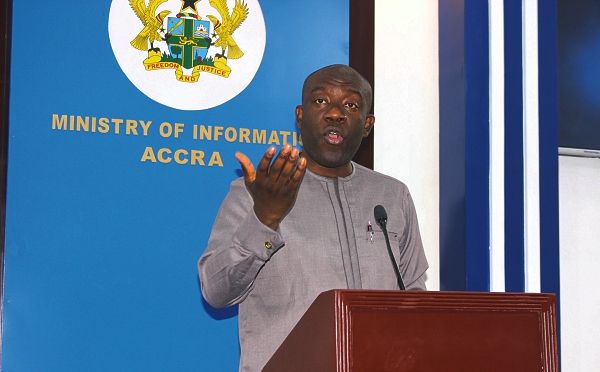 The Cabinet has approved two initiatives to boost the study of science, technology, maths and engineering (STEM) across the basic and senior high education levels.

The first involves the construction, provision of equipment and training of trainers for regional science, technology, engineering, arts and mathematics centres for senior high schools (SHS) at a cost of GH¢88 million.

The second initiative is a basic science, technology, engineering and mathematics (BSTEM) programme to be financed at a cost of £76 million.

The Minister of Information, Mr Kojo Oppong Nkrumah, who announced this at a media briefing in Accra yesterday, said when approved by Parliament, the project would engender a practical approach to learning in SHSs.

“It will also provide ICT equipment to improve the competency of both teachers and students,” he added.

Mr Nkrumah said the overall aim of the project was to enrich the academic content offered by formal training in STEM.

He explained that the GH¢88 million would cover the first phase of the project, which would comprise 10 centres, while a second phase of six additional centres would be built.

He said on receipt of parliamentary approval and the disbursement of funds, “this first phase is expected to be completed within two years.”

Touching on the second project, the Information Minister said it would cover all basic schools across the country and would be carried out in three phases over a five-year period.

He explained that it involved the delivery and installation of BSTEM equipment and training to improve the quality of science and mathematics education within the basic educational system, adding that it would include training modules for regional advisors and teachers.

Mr Nkrumah said the project was an addition to the introduction of basic engineering and technology into the curriculum of the country’s basic education.

“Building on a successful pilot programme conducted in 2008 with 100 JHS teachers, the BSTEM programme is aimed at developing the teaching of science and maths to better prepare teachers to impart practical and problem-solving skills to pupils.

He expressed the hope that the two initiatives would significantly improve the teaching and learning of science and mathematics in schools and in so doing improve the analytical and problem-solving skills of schoolchildren in the medium to long term.