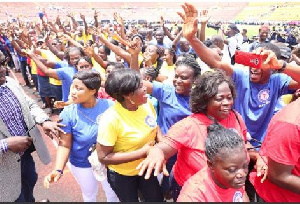 As we celebrate International Labour Day today, there is a need to reflect and reconsider the devastating impact of youth unemployment and underemployment in the African continent.

At the heart of the development agenda of many African countries, African governments are exhibiting enormous concerns about youth development, however, a whole lot of work needs to be done in order to move from empty talks and hollow speeches.

The issue of youth unemployment is becoming increasingly worrisome in many parts of the world. Youth unemployment has national and global impacts, notably among which are increased cyber-crime, violence, crime, drug abuse and political instability. Desperation has driven many young people into living outside the law in order to survive and as a means of expressing dissatisfaction at the apparent neglect of their very existence.

African youth lose hope of finding a decent job and are compelled to cross dangerous paths and waters to better pastures, with all too tragic consequences. It is no longer news that less than one-third of the thousands of young Africans who attempt to reach Europe through the Sahara Desert and other illegal channels make it to their dream destinations.

For many decades, African governments and international partners focused more on macroeconomic stability and structural adjustment as a means to promote economic growth and job creation. For the youth and adults alike, this approach has not solved the issue of youth unemployment which made them social waste and reduce poverty as envisaged.

There is now a growing consensus about specific policy measures are required to tackle the main barriers to employment generation for Africa’s youth.

According to Commonwealth Plan of Action for Youth Empowerment(1998), the role and significance of youth in the socio-economic and political development of every nation is fascinating indispensable and there is a need to initiate National Youth Development Policy that is well-articulated with well-directed efforts focused on tapping the energy and resourceful of the youth to harness their true potential in this 21st Century.

To address the problems of youth and empower them, there must be a commitment to developing them by reinforcing resolution of various international organisations.

However, most African governments have created cinereal Ministries that are in charge of youth that does not carry out their mandatory but is rather involved in clandestine activities.

The educational system in Africa needs serious overhauling with the inculcation of innovation, research and entrepreneurial skills. Since the post-independence of African countries, African governments have continued with the same pedagogy where the students are trained to take the role of secretary and other menial jobs placing more on academic excellence rather skill acquisition.

The acquisition of vocational skills will prepare the individual for a more useful and fulfilling life which made them more relevant to the development of the nation.

In a nutshell, the youths of Africa could be critical for the development of a new class of entrepreneurs that African countries need to prosper. Furthermore, Africa has an opportunity to harness a “demographic dividend”: With the projection that most countries in Africa will have more working-age adults per child in 2030 than in 2006, there will be a large workforce supporting fewer children and the elderly. As motivated and inspired citizens, young people are agents of change with the potential for taking a leading role in tackling Africa’s development challenges for themselves, their families and society.

The youth of today are the leaders of tomorrow.