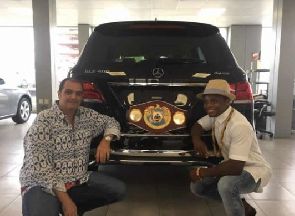 Isaac Dogboe and his team from Rising Star Promotions were at the premises of the leading automobile dealer to acknowledge its continuous support.
Management members of SSAL led by the Chief Executive Officer, Mr Nouhad Kalmoni, welcomed Team Dogboe and congratulated him for winning the title from Mexico’s Jessie Magdaleno.

Dogboe, 23 churned out a masterful performance to knock down Jessie Magdaleno once in the fifth round and twice in the 11th round to win the WBO super bantamweight crown and becomes Ghana’s eighth world boxing champion.

Mr Nouhad Kalmoni on behalf of SSAL congratulated Isaac Dogboe for making Ghana proud.
”Ghana has waited quite long for the next world champion and as a company, we never doubted your ability and exploits as we always see your team as a humble one who can achieve greater heights,” he said.

“Isaac Dogboe’s ambition is to go through several weight categories and this title provides the pedestal for such opportunities” he added and expressed optimism that the hunger in Dogboe will spur him to become one of the world’s greatest boxers.

Mr Kalmoni noted was proud to be associated with boxing and as it has partnered Isaac Dogboe and the Rising Star Promotions Ghanaians should expect nothing but history in the making for the boxing fraternity.

Isaac Dogboe who was accompanied by his father and trainer Paul Dogboe and his team from the Rising Star Promotions seized the occasion to thank Ghanaians for the support and assured to continue training hard to bring more laurels.