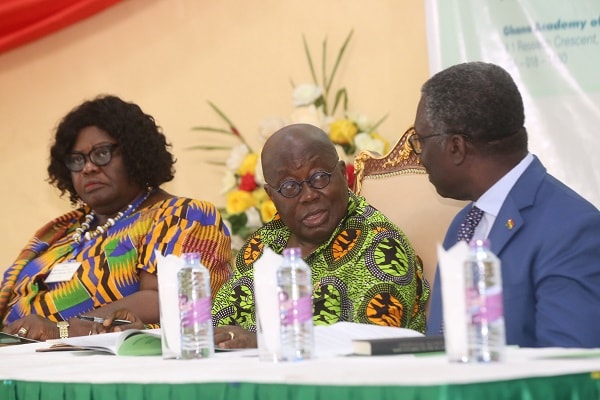 President Nana Addo Dankwa Akufo-Addo has urged African scientists to let science, technology and innovation drive their respective economies for the accelerated development of the continent.

He said Africa had not developed its abilities well enough to find solutions to domestic problems, as the continent continued to rely on external sources for solutions, adding: This must change.”

President Akufo-Addo, who was addressing the 15th Annual Meeting of African Science Academies (AMASA-15) in Accra yesterday, said: “We can no longer continue to make policies for our countries on the basis of whatever support the technologically advanced world can give us. It has not worked, and it will not work.”

The three-day meeting is on the theme: “Science, Technology and Innovation for food security and poverty alleviation in Africa: The role of academies” and hosted by the Ghana Academy of Arts and Sciences.

The President said Africa still had some unfinished business of providing the masses with a dignified standard of living and moving countries onto the path of sustained progress and prosperity, adding: “Most nations on the continent gained independence very much at the same time as their counterparts in Asia.”

He said while those Asian nations had succeeded in applying the benefits of technology to develop their countries and moved into the ranks of First World economies, Africa had not done well with its economies, as they remained agrarian, dependent largely on the production and export of raw materials and supported by the charity of donors.

President Akufo-Addo expressed the hope that the outcome of the meeting would help improve the lives of the people.

He said the coming into force of the African Continental Free Trade Area (AfCFTA) agreement, which covers a population of 1.2 billion people, with a combined gross domestic product (GDP) of $3 trillion, could open new vistas of opportunity for the rapid social and economic growth of the continent.

President Akufo-Addo said the idea to establish the GAAS was initially mooted by Dr J. B. Danquah, one of the great protagonists of Ghana’s independence struggle, in the early 1950s, but said it was the first Prime Minister of Ghana, the legendary Osagyefo Kwame Nkrumah, who eventually made it happen.

“Rarely for those times, they were both founder members of the academy, who, according to an eyewitness account of a fellow member, the late Prof. Alex Adum Kwapong, the first Ghanaian Vice-Chancellor of our premier university, the University of Ghana, worked well together to set the academy on a positive path of national engagement,” he added.

The Minister of Environment, Science, Technology and Innovation, Prof. Kwabena Frimpong-Boateng, said after Ghana’s independence, there was an industrialisation drive of import substitution and job creation, but without a science and technology component.

“This policy puts emphasis on science, technology and mathematics, technical and vocational education and the devotion of one per cent of Ghana’s GDP towards research and development,” he said.