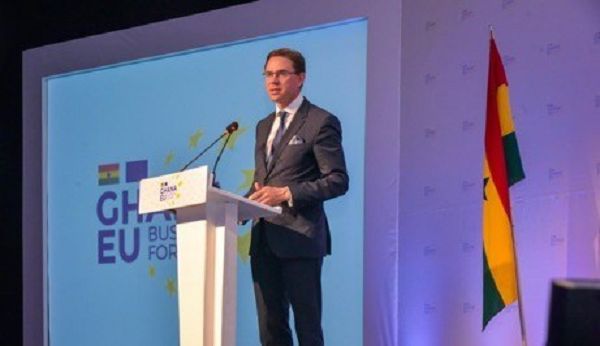 Local banks in the country are set to benefit from a €750 million guarantee from the European Commission under the NASIRA financial programme which uses guarantees to allow local banks to on-lend to underserved entrepreneurs within the European neighbourhood and Sub-Saharan Africa.

The aim of the NASIRA programme is to create 800,000 jobs and boost access to finance for people such as migrants, the youth and women who usually struggle to access funds.

It targets portfolios consisting of loans to youth, females and migrant entrepreneurs (including refugees, returnees and internally displaced people) and the goal of these guarantees is to allow local banks to provide loans to groups they normally perceive as too risky.

Speaking at a lecture on Africa-Europe Alliance, which was organised by the Council of Foreign Relations Ghana, the EU Commission Vice President for Jobs, Growth, Investment and Competitiveness, Mr Jyrki Katainen, said “this tool is for you.

The local banks in Ghana will benefit from this guarantee and it will allow them to invest in some of the cutting-edge ideas that would otherwise be too risky for them to support.”

He said the EU Commission was also looking at supporting the government’s efforts to boost access to electricity and ensuring affordability as one of the pillars of a rapid response action plan to improve the business environment.

In this regard, he said the commission sought to support with its guarantees as it did with grants.

“Our guarantee tools aimed at boosting access to renewable energy and its affordable prices in Sub-Saharan Africa, including Ghana, will amount to €450 million.

Through the guarantee tool with the European Investment Bank, French Development Agency (AFD) and German Development Bank (KfW), we plan to provide independent power producers with the necessary liquidity to cover their financing gaps in case their off-takers delay payments,” he explained.

He said all those support through the guarantees were aimed at strengthening micro, small and medium-sized enterprises and private sector development, which are the anchor of Ghana’s economy.

“We will promote gender equality, empowerment of women and young people.

Through this alliance and its innovative approach in terms of investment, we want to give you the tools that you can turn into innovative solutions.

It is for you to become ‘William Kamkwamba’- the Malawian boy who harnessed the wind and provided electricity to his village.

That’s how you start shaping the future and we are here to support you,” he stated.

He said both Africa and Europe were in exciting times, yet challenges such as precarious jobs, inequalities and climate change still remained.

“We need to grasp the challenges and turn them into opportunities. The problem of lack of fixed telephone lines in Africa a few years back was turned into an opportunity, with mobile phone penetration in Africa reaching record high levels.”

To adapt to a rapidly changing global context and emerging challenges, he said the EU recently launched an Africa-Europe Alliance for sustainable investment and jobs.

He said the alliance would take the partnership to the next level, shift the paradigm and go beyond a traditional development aid based one.

“We are putting the private sector right in the centre of this partnership as it holds the largest potential for generating jobs and sustainable growth.

We need to unlock more responsible private investment in Africa and in Ghana,” he stated.