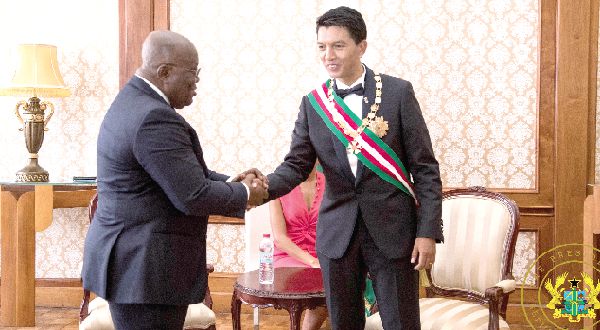 The new President of Madagascar, Mr Andry Nirina Rajoelina, has stated that his country will seek stronger ties with Ghana for the mutual benefit of the people of the two countries.

He said the potential to increase bilateral economic relations existed and Madagascar would pursue that agenda.

President Rajoelina said this last Saturday when he held bilateral talks with President Nana Addo Dankwa Akufo-Addo in the Madagascar capital, Antananarivo, shortly after he was sworn into office as President.

It was the first time since independence that Madagascar had witnessed peaceful democratic power transition between two elected Presidents.

The Madagascar High Constitutional Court, on January 8, this year, declared Mr Rajoelina the winner of the presidential election with 55.66 per cent of the votes.

President Rajoelina commended President Akufo-Addo for the impressive manner he had steered the affairs of Ghana within the last two years, which he said had made the country one of the fastest growing economies in the world.

He also expressed his admiration for the Ghana Beyond Aid vision and lauded President Akufo-Addo for his decision to situate industrial establishments in all parts of the country, guarantee access to education for all Ghanaian children and move towards making Ghana self-sufficient in the production of food.

He said all the initiatives could put Ghana onto the path of progress and prosperity.

Responding, President Akufo-Addo congratulated President Rajoelina on his election to the high office of President of the Republic of Madagascar and wished him well during his tenure.

He also commended President Rajoelina for his decision to restructure the economy of Madagascar for “strong growth”, as well as establish an independent body similar to Ghana’s Office of the Special Prosecutor to combat corruption in his country.

President Akufo-Addo assured President Rajoelina of Ghana’s unflinching solidarity with Madagascar and pledged to do his best to deepen the ties of cooperation, friendship and trade between the two countries.

Earlier in his inaugural speech, President Rajoelina said the presence of the three past elected Presidents — Didier Ratsiraka, Marc Ravalomanana and Hery Rajaonarimampianina — at the ceremony was evidence that democracy in Madagascar was growing.

He promised the establishment of industries in all the six provinces of the country to accelerate its development.

He also assured Madagascans that he would double electricity production in the country and also sell it at low prices to consumers.

“We will create a solar panel manufacturing company to bring light to every family,” he promised further.