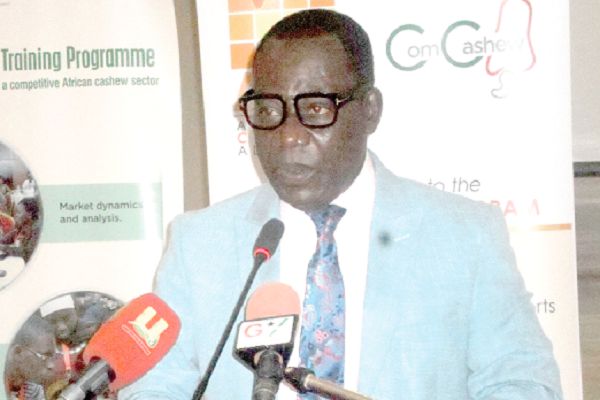 The Ministry of Food and Agriculture (MoFA) has distributed 1.6 million improved cashew seedlings to farmers this year.

In all, 2.5 million seedlings have been earmarked for the government’s Planting for Export and Rural Development (PERD) initiative.

A Deputy Minister of Food and Agriculture, Mr George Oduro, who announced this in a speech read on his behalf, said the cashew seedlings were being distributed to farmers in 98 districts across 13 regions to shore up the production of the crop in the country.

The Greater Accra, Western and Western North regions are the only areas which are not benefitting from the programme.

Mr Oduro made the announcement at the second session of the ninth edition of a Master Training Programme (MTP) on the cashew value chain which opened in Sunyani in the Bono Region yesterday.

The five-day international training programme is being attended by 97 cashew experts from 14 countries in Africa, Europe and Asia.

The MTP, which was organised by Competitive Cashew Initiative (ComCashew), a non-governmental organisation, with support from the German Technical Cooperation (GIZ), seeks to increase the knowledge and practical skills of African cashew experts along the value chain.

The participants will also conduct field work to deepen their knowledge on selected topics, after which they will be certified and acknowledged as cashew experts to enable them to train farmers, aid processors and advise institutions in their respective countries.

The Sunyani conference is the seventh edition of the MTP, with the next programme to be organised in Cote d’Ivoire.

Mr Oduro explained that in view of the government’s drive to increase the production of tree crops, MoFA considered the distribution of improved planting materials and adherence to good agricultural practices as critical areas in the cashew value chain.

He said with increasing challenges posed by climate change, it was crucial that Ghana develop sustainable strategies for mitigation, explaining that the cashew tree, besides its economic importance, had the potential to withstand climate change effects.

“I believe given the cooperation among public, private and development partners, we are on the right path to strengthening the Ghanaian cashew sector and making it competitive,” he said.

The Executive Director of GIZ/ComCashew, Ms Rita Weidinger, commended the government for its commitment to ensure that a Tree Crops Authority was established.

She said her organisation considered cashew as an important commodity for the government’s Planting for Food and Jobs initiative.

For his part, the Bono Regional Director of Agriculture, Mr Richard Donkor, said the cashew industry needed a core of experts to lead efforts in making the crop increase its foreign exchange earnings for African countries and expressed appreciation to ComCashew for the programme.