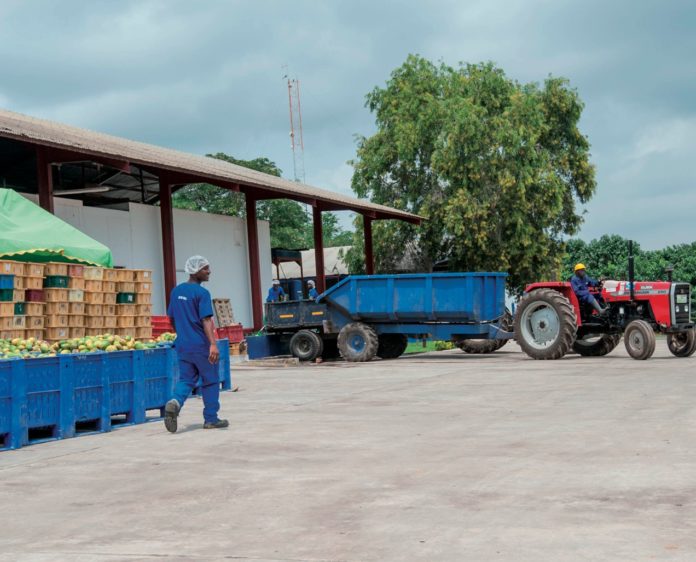 Ghana is exploring new investments to increase its returns on agricultural output, with the development of value-added projects aimed at expanding agro-processing capacity.

In early August, construction commenced on a US$3m tomato-paste processing plant at Afienya in the Greater Accra Region – with production scheduled to start by end of the year.

The plant will produce 300 containers of tomato paste per month once at full capacity; along with spices and other condiments for both the local and export markets.

The development falls under government’s One District, One Factory (1D1F) initiative launched in August 2017, which aims to broaden the country’s manufacturing base by building a factory in each of Ghana’s 216 districts by 2021 using public-private partnership financing models.

With much of Ghana being heavily reliant on agricultural production, the 1D1F programme has a strong focus on agro-processing capacity as a means of adding value to local farm output.

Construction of the new paste-plant is in line with broader state policy, with expanding agro-processing capacity a cornerstone of government’s new strategy to strengthen food security and self-sufficiency by 2030.

Launched at the end of May, Addressing Sustainable Development Goals (SDGs) 2: The Ghana Zero Hunger Strategic Review identified upgrading the food handling, logistics and processing chain as being vital to achieving the strategy’s goals, along with reducing post-harvest losses – which are estimated at up to 40% of total production, according to World Food Programme (WFP) data.

“Post-harvest management – such as ready market for farm produce, storage and standards – is another challenge to food and nutrition security in the country,” the report said.

“Additionally, lack of linkages and integrity in the entire value chain of food systems and standards also poses a challenge to food security in Ghana.”

With Ghana yet to develop a broad-based processing capacity, the report also recommended giving farmers support and training to add value to their own crops. This included developing solar drying units for growers to process and preserve fruit and vegetable produce, a measure aimed at extending the marketable life of perishables and reducing post-harvest losses.

Furthermore, in August government authorised funding for 2,700 new staff to support farmers on the Planting for Food and Jobs programme, which aims to assist farmers in growing food for local consumption. The project will enroll 500,000 farmers this year, offering them technical support to improve yields – including the sale of subsidised farm inputs. The crops covered under the programme have also been extended to include cabbage, lettuce, groundnut, cassava and soya beans.

On top of improving self-sufficiency, government is also looking to build food export capacity by supporting investment in upstream production – both to provide additional produce for sale overseas and as feedstock for the domestic agro-processing sector to add value before export.

Ghana is a net importer of food and agricultural products, with inbound shipments of US$2.4bn last year, according to data issued by the Ministry of Agriculture – of which a significant portion was processed foods. By contrast, agriculture generated revenue of US$1.2bn through exports, mainly raw produce such as cocoa, cashew, bananas and shea nuts.

As part of plans to expand exports and shift sales up the value chain, government has since February been piloting a programme to cultivate coconut, oil palm, cashew, coffee, shea and citrus trees. The Planting for Export and Rural Development programme is working with these specific crops to feed directly into agro-industrial projects being established under the 1D1F initiative.

Up to 4m ha of fruit trees will be planted over the next three years, with the output to provide feedstock for milling factories to be built under 1D1F, Kennedy Osei Nyarko, the Deputy Minister of Agriculture, announced on July 30.

The efforts to improve agro-processing are being further supported by an increased emphasis on the deployment of appropriate technology and research to improve yields.

As part of this project, 10,000 cashew seedlings were distributed to growers in the North Gonja district of the Northern Region in early August; with farmers also provided with training on how to nurture and sustain the trees.