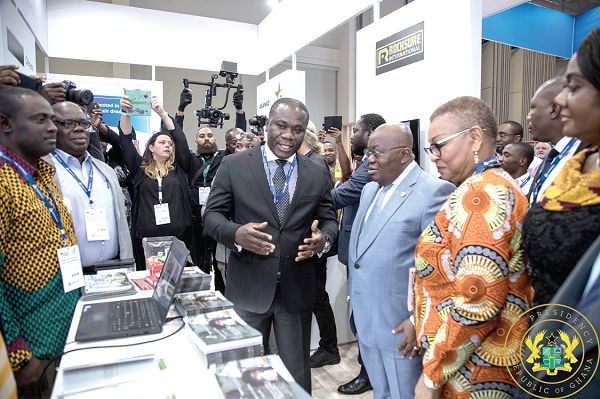 President Nana Addo Dankwa Akufo-Addo has stated that it is not right that Africa, which is rich in minerals sought after by the world, should remain inhabited by the poorest people in the world.

“Africa has made the world rich with our minerals; our gemstones adorn crowns and homes around the world. It is time to make

Africa prosperous and enable its people to attain a dignified standard of living,” he said.
Addressing the 2019 edition of “Investing in African Mining Indaba”, the world’s largest mining investment conference, in Cape

President Akufo-Addo, however, acknowledged the fact that African countries had not done well in negotiations with mining companies that had mined Africa’s minerals in the past.

That notwithstanding, he said, the continent had come of age and should not give unusual tax and royalty incentives.

He posited that the mining industry had what it takes to help in the economic transformation of the continent and thereby make Africans prosper.

Quoting from a speech he delivered on January 22, 2019 at the reopening of the AngloGold Ashanti Mine in Obuasi, Ghana, the President said the Obuasi negotiations were done under an agreement that balanced more fairly the interests of the two sides, namely, the Government of Ghana and AngloGold Ashanti.

“As I said at the ceremony, it is my hope and expectation that this time round, under the new management of AngloGold Ashanti, the development of Obuasi will reflect the wealth its soil produces,” he said, stressing that minerals were a public resource and, therefore, negotiations between countries and companies should be transparent, accessible and easily understandable by the citizens.

He said such negotiations should be done in a language that did not need to be interpreted by experts.

“Communities should be able to examine mining contracts, find out how much revenue has been generated and how and on what it is being spent,” he said.

“Long and bitter experience means both sides, African governments and mining companies, have to work hard to gain the trust of the people,” he maintained.

He said “mining could rapidly help grow the continent’s manufacturing sector and also be the champion of its economic growth”.

That, President Akufo-Addo pointed out, would not happen if Africa remained the place for other people to come and dig minerals that were exported in their raw condition to be processed outside.

“We cannot and should not continue to be merely exporters of raw materials to other countries.

The value chain of mineral extraction has great potential for job creation and can form an essential basis for the transformation of economies around the continent,” he emphasised

On the exploitation of Ghana’s mineral resources, he said the country had decided to exploit them responsibly.

“We have established the Ghana Integrated Aluminium Development Corporation, a public corporation, to take charge of the development, with appropriate investors, of the full value chain of our bauxite resources in order to establish an integrated aluminium industry in Ghana,” he said.

He said the country was also determined to build an integrated iron and steel industry out of its extensive iron ore and manganese deposits to serve the needs of the country and those of the region.

“Parliament, in its current session, will consider and hopefully approve the establishment of another public corporation, the Ghana Integrated Iron and Steel Development Corporation, which will, with appropriate investors, take charge of this undertaking,” the President told the conference.

He added that work was underway to exploit the considerable deposits of lithium in the country, pointing out that “we hope to establish, in all these new ventures, an equitable balance between our needs and the needs of the investor community”.

President Akufo-Addo ended by saying that the time had come for the minerals sector to produce win-win situations for all stakeholders.

He, therefore, urged the conference participants to pay attention to “riches on top of the land in the form of a young, vibrant and dynamic population who are anxious to work and who, with the requisite skills, represent an extremely positive factor in the rapid development of the continent”.