No place to hide for illegal miners — Frimpong-Boateng 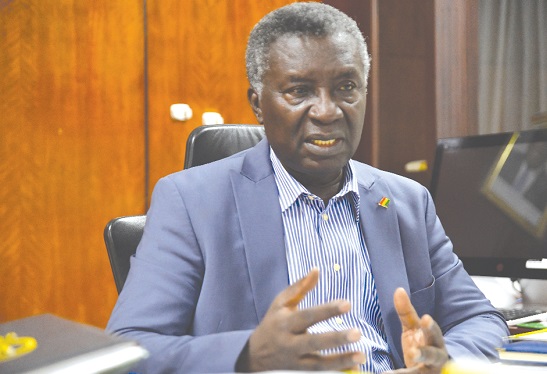 The Minister of Environment, Science, Technology and Innovation (MESTI), Professor Kwabena Frimpong-Boateng, has said the government will not bow to election year pressures to loosen the knot on the fight against illegal mining, popularly called “galamsey.”

“Some people think that because 2020 is an election year we would be compelled to relax the fight against illegal mining, but this will not happen. Nobody is bigger than this country, so we are going to take very severe action against those behind the illegality and there will be no hiding place for anybody,” he stressed.

Speaking in an interview with the Daily Graphic yesterday Mr Frimpong-Boateng said the Inter-Ministerial Committee on Illegal Mining (IMCIM) would work to ensure that President Nana Addo Dankwa Akufo-Addo’s commitment to weed out illegal mining in the country was realised.

The interview followed reports of the resurgence of illegal mining in some parts of the country, the latest of which is the invasion of the Oda River Forest Reserve in the Amansie Central District in the Ashanti Region.

The galamsey operators who are said to be riding on the shoulders of some “big men” had destroyed several hectares of the forest cover.

Prof. Frimpong-Boateng warned so-called “big men” who were behind the illegal mining activities to be prepared to face the law when caught.

“There is no bigger person than the President, who is the Commander-in-Chief of the Ghana Armed Forces (GAF); and he is saying that illegal mining should not be allowed in this country. I am surprised therefore that there is a bigger person somewhere who wants to perpetrate the illegality,” said.

The minister said even though the government had made significant progress in its fight aganist galamsey as well as bring sanity to the small-scale mining sector, there were still some illegal miners who were recalcitrant and disrespected the mining laws.

“There are not too many of them and the damage they cause is severe. We know where they are; we have data on them and we are going to take serious action to crack down on them,” he said.

Prof. Frimpong-Boateng said the IMCIM was focused on working the other stakeholders such as the Ministry of Land and Natural Resources and to ensure that many people benefited from the community mining programme.

He said hundreds of companies had been vetted and cleared for concessions to be alloted them but the concessions were unfortunately not enough in some mining districts.

“If we are able to shift the innocent children of God to the community mining programme, we can then deal with the children of satan who are engaging in illegalities,” he said metaphorically.

He said with the help of drones, the IMCIM and the others stakeholders had been able to monitor the activities of those who had been allotted concessions under the community mining programme to ensure that they operated within the law.

On the way forward, Prof. Frimpong-Boateng said the IMCIM was awaiting a report from Mr Asomah-Cheremeh for it to feed into a crack-down plan it has in the offing.