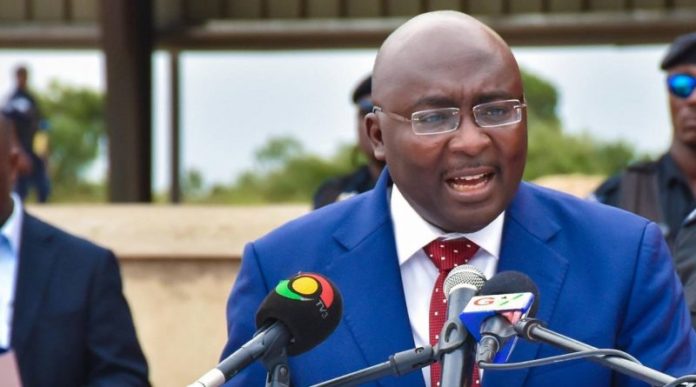 The implementation of the National Single Window and Paperless Port System at the country’s sea ports is gradually yielding results to the admiration of importers and stakeholders.

Analysis of the Monthly Import Performance of the Customs Division of the Ghana Revenue Authority (GRA) between 2015 and mid-year 2018, show that the amount of revenue realized from imports has been increasing year-on-year.

The growth in revenue realized from imports over the period can largely be attributed to the strengthening of the Single Window System at the country’s ports in September 2015, when WestBlue Consulting was brought on-board to compliment the efforts of GCNet, and the recent implementation of the Paperless Port System at the country’s sea ports, spearheaded by the Vice President, Dr. Mahamudu Bawumia.

For the first half of this year, about GHȼ5,798.76 million has been collected for the state from importers. The GRA projects a 30 percent growth in revenue by close of the year.

Vice President, Dr. Mahamudu Bawumia, has indicated that the numerous reforms at the country’s sea trade sector have minimized corruption, and increased government’s revenue over the last few years.

According to him, the huge investments and interventions at the country’s ports were borne out of the sector’s contribution to the socio-economic development of the country hence the need to continually improve upon the gains made in the sector.

Addressing the 39th Council and Conference of the Port Managers of West and Central Africa (PMAWCA), hosted by the Ghana Ports and Harbours Authority (GPHA) in Accra, he said: “We are convinced that the port industry, if properly managed, could serve as the engine of growth for the economy. The reserve is that it could serve as hot bed for corruption. The various port reforms are meant to ensure easier transactions at the port while blocking avenues for corruption.”

Government has rolled numerous interventions in recent months as part of efforts to maximize the socio-economic gains of the maritime sectors.

Among them include the reduction in the number of inspections agencies at the port, the paperless clearance of goods as well as the scrapping of barriers along trade corridors.

Also, to smoothen the paperless port programme, the compliance phase—which was a blockade to the timely flow of the goods clearing process at the port– has been abolished.

Dr. Bawumia, in his assessment indicated that the numerous measures have caused significant strides in the port sector looking at port performance and general port efficiency and relief to the shipping community.

“The high levels of investment in the port industry are geared towards improving cargo handling and dwelling time as well as enhanced service delivery and a reduction in the cost of doing business at our ports.

These interventions have helped to reduce human interference, streamlined the clearance process, and secured national revenue collection while promoting a high level of compliance from shippers,” Dr. Bawumia indicated.

He added: “As a government, we will improve business practice in the maritime sector and strengthen ties with trade partners and also enforce strict adherence to rules and regulations relating to maritime activities within the sub-region.”

Some importers who spoke to the paper praised the Vice President for the on-going paperless reforms at the port.

They urged government to do all it can to make the paperless ports work by supporting the existing vendors (West blue and GCNet) as well as the other stake holders to deliver.

The 39th Council and Conference of the Port Managers of West and Central Africa (PMAWCA) brought together heads of various maritime administrations within the sub-region, policymakers and captains of the sea trade sector to discuss pertinent areas of concern in the industry and plan for the years ahead.

Acting Director-General of the GPHA, Micahel Luguje, in his remarks, applauded government for giving strong backing to ongoing infrastructural expansion works at the country’s ports and the numerous reforms it has rolled out to fast-track the cargo flow process.

Commenting on the main theme of the conference: “Best Practices in the Management of Port Lands”, the GPHA boss called on the need for port countries to manage port lands in a sustainably with adequate planning, especially considering that ports are sited within business and industrial areas.

He said there is growing importance of land to port communities as ports seek to expand facilities to enhance their operations and to facilitate international trade.

“Among the several future challenges that will be confronting port authorities, land management is predicted to be the major challenge as ports’ traffic grows vis-à-vis the competing needs of municipal and urban authorities for development,” Mr. Luguje noted.

He added: “We are now faced with the task of reclaiming port lands from the sea at a high cost while pricing port spaces in a way that attracts investors. Since land is very critical to ports, port lands should be planned and managed effectively and efficiently.”

Mr. Luguje stressed that the ports industry remains the leading economic pillar port countries and the conference offers the opportunity for the leadership of port administrations across West and Central Africa to deliberate on how to best manage lands to meet competing needs to maximize value.