PFJ is Most Outstanding Programme; Chamber of Agribusiness Ghana 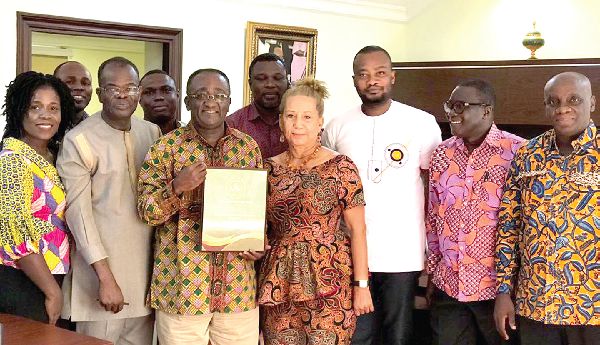 The government’s flagship agricultural programme, Planting for Food and Jobs (PFJ), has been acknowledged as the “Most Outstanding Programme” among the many interventions introduced by the government.

The Chamber of Agribusiness Ghana (CAG), which acknowledged the performance of the programme, noted that the PFJ initiative held great prospects for the agricultural sector.

A citation to the Minister of Food and Agriculture, Dr Owusu Afriyie Akoto, stated that the policy had evoked “euphoria, excitement and unparalleled coverage” for players in the industry.

A delegation of the chamber, led by its National Chairperson, Ms Marjorie Abdin, presented the citation to the minister in his office last Friday.

She noted that the programme was a revolutionary step towards reviving the agricultural sector in the country.

Ms Abdin, who presented the citation to Dr Akoto, explained that the presentation was acknowledgement of the outstanding contribution of the programme to the country’s agricultural industry.

The group also honoured the minister for championing the Planting for Food and Jobs programme, describing his work as “outstanding performance” since his appointment.

The latest award follows similar recognition by the Association of Aides to Regional Chairmen of the NPP, which voted Dr Akoto as the best performing appointee for the year 2018.

Dr Akoto expressed appreciation to the CAG for the honour and recognition of the contribution of the ministry.

He reiterated the commitment of the government and the President, Nana Addo Dankwa Akufo-Addo, to the agricultural sector.

Dr Akoto said the award to the ministry was a due recognition of the impact the programme had had on the businesses of members of the chamber.

The delegation also included a board member and Chairman of the National Farmers and Fishers Award Winners Association of Ghana, Mr Davies Narh Korboe, and the CEO of the chamber, Mr Anthony Morrison.

Others were the Senior Advisor, Research & Development of the chamber, Prof. Paa Nii Johnson, who is also with the University of Ghana/CSIR; the Director of Food and Intellectual Property, Dr Courage Adanu Bessah; a Senior Policy Advisor at the chamber, Togbe Festus, and the Resource Economist at the chamber, Mr Ebenezer Ennibil.