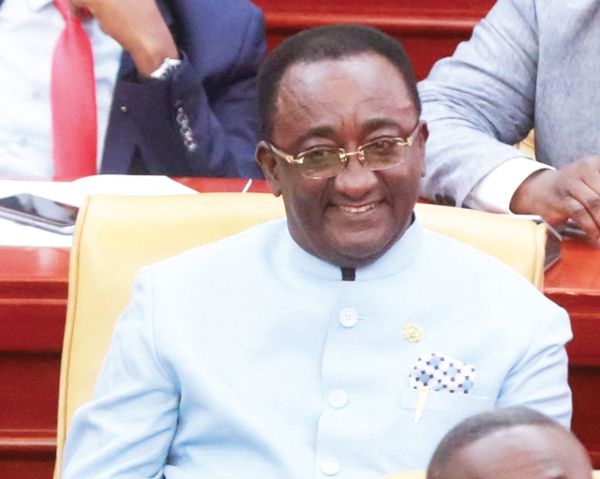 The Minister of Food and Agriculture, Dr. Owusu Afriyie Akoto, was yesterday praised by President Nana Addo Dankwa Akufo-Addo for the effective manner in which he has implemented the government’s agriculture flagship programme: Planting for Food and Jobs.

“Thanks to the programme for Planting for Food and Jobs admirably organised by that outstanding Minister for Agriculture, Dr. Owusu Afriyie Akoto, this House stands informed that in 2018, exports of food crops such as cassava, rice, yellow and white maize, soya, plantain, cowpea and yam were made from Ghana to Burkina Faso, Togo and Cote d’Ivoire in considerable quantities,” he said.

President Akufo-Addo made the commendation during his third State of the Nation Address delivered at the Parliament House in Accra yesterday.

He said by courtesy of the programme, “we had a bumper harvest of produce, and last year, we did not import a single grain of maize”.

The President added that the past two years showed that “when a government takes deliberate measures to support agriculture, it pays healthy dividends”.

He said the Planting for Food and Jobs programme had led to an abundance of food in the country and for the first time in a long while, the country had more than it needed.

President Akufo-Addo recalled that not long ago, Ghana was in the “humiliating” position of having to import maize from landlocked Sahelian neighbours and plantain from Cote d’Ivoire.

The President said with the Planting for Food and Jobs programme, that was history now, adding that based on the successes chalked up in 2017 and then in 2018, the ministry took giant strides to scale up the campaign in 2019 and to introduce new modules of the programme.

He announced that four of such new modules were the Greenhouse Villages programme, the Planting for Export and Rural Development (PERD) programme, the Rearing for Food and Jobs (RFJ) campaign and Mechanisation Centres programme.

“We are hoping that the success will lead to a fundamental change in attitudes towards farming practices, and the sector will be truly transformed.

“Bumper harvests and increased food production in general will be the norm, and not a surprise once in a while,” President Akufo-Addo told Parliament.

He announced that the extension services would be expanded, and the farmers would have the confidence to know that theirs was a worthwhile business from which they could and would get healthy remuneration and respect.

Aquaculture for Food and Jobs

The President also announced that a version of the Planting for Food and Jobs would be rolled out this year under the Ministry of Fisheries and Aquaculture Development.

President Akufo-Addo explained that priority would be given to youth entrepreneurs, distressed farmers, second cycle and public institutions to set up and operate fish farms across the country.

“The programme will offer participating individuals and groups the requisite inputs, such as cages, fingerlings, fish feed and training, to be able to establish their own farms.

“The AFJ will be implemented for three years, from 2019 to 2021, in collaboration with the Nation Builders Corps (NaBCo) and the Ghana School Feeding Programme.

“It is expected to create 7,000 jobs and add an extra 33,628 tonnes of fish to our domestic fish production. Piloting of the AFJ has already started at the James Camp Prison,” the President said.

For traditional fishing, he said the government would collaborate with the private sector to facilitate the provision of 5,000 outboard motors and 55,250 bales of prescribed fishing gears through the fisheries associations.

“To promote the effective and efficient distribution of premix fuel, we will continue to use the premix fuel tracking system and audit landing beaches, measures which have ensured that since November 2018, there has been no report of premix diversion, a marked improvement from the past,” the President said.

He disclosed that a US$185 million loan had been earmarked for the construction of 12 landing sites and two fishing harbours in some selected fishing communities in the country.

He explained that the move was to modernise the fishery sector, adding that phase one would start in March at Axim, Mumford, Winneba and Teshie.