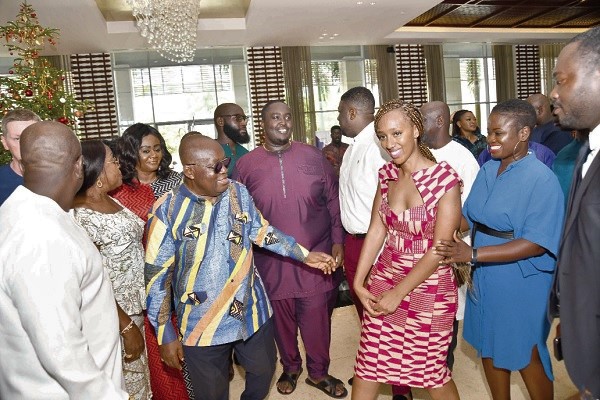 President Nana Addo Dankwa Akufo-Addo has commended Ghanaians for helping to make the Year of Return a great success.

“The welcoming attitude and the warm Ghanaian hospitality proved to be the strongest attraction to hundreds of thousands of our kith and kin from the African Diaspora who thronged our shores to commemorate the Year of Return. Once more, the proverbial Ghanaian hospitality won,” he said.

The President, who gave the commendation in a statement issued in Accra yesterday, said the Year of Return proved to be exciting and afforded Ghana the chance to re-establish, intensify and solidify the relations between Africans on the continent and those in the Diaspora.

He said those who came from the Diaspora felt very welcome, enjoyed their stay and, as a result, Ghana was, once again, the toast not only of Africa but also the world.

President Akufo-Addo proclaimed the ‘Year of Return’ to commemorate the 400th anniversary of the arrival in 1619 of the first 20 slaves from West Africa in the Commonwealth of Virginia, which later became part of the USA.

The purpose was to bring together Africans, persons of African descent and all well-wishers and lovers of freedom to strengthen their collective commitment to ensure that the blots in Africa’s history, such as the Trans-Atlantic Slave Trade and slavery, never recurred.

It was also to provide the platform for strengthening the ties of solidarity among all people of African descent.

The President travelled to the Caribbean and other parts of the world to preach the Year of Return, which brought to Ghana hundreds of thousands of people of African descent, including members of the Black Caucus of the United States Congress.

President Akufo-Addo recently announced the “Beyond the Return” initiative to ensure that the success story of the Year of Return was sustained.

The Ministry of Finance has also created the Diasporan Savings Account to encourage investments into the country from Africans living in the Diaspora.

Known as the ‘Africa Sankofa Account’, the framework hopes to attract about $3 billion from people in the Diaspora yearly.

President Akufo-Addo commended the Inspector General of Police, the Chief of the Defence Staff, the officers, men and women of the country’s security services for their sense of professionalism and dedication to duty.

That, he said, enabled them to preserve the peace and security of the country in the course of the celebration and, “by the grace of God, no untoward incident occurred”.

“As we begin the new initiative of ‘Beyond the Return’, which will entail that we engage in mutually beneficial trade, investment and cultural co-operation with the African Diaspora, I urge all Ghanaians to demonstrate this same level of excitement and commitment that characterised the Year of Return and help make that too an enduring success,” he urged Ghanaians.

The President also expressed confidence that Ghanaians could imbibe a deep consciousness and understanding of the goals and history of African peoples to ensure that the 21st century was, indeed, the African century; the century of Black people the world over.