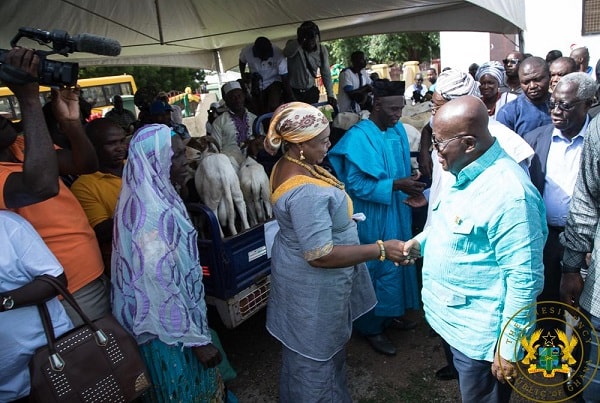 The President, Nana Addo Dankwa Akufo-Addo, launched another flagship programme, Rearing for Food and Jobs (RFJ), in Wa in the Upper West Region on Monday.

The programme will be piloted in the five regions of the north for five years before being replicated in other parts of the country.

It involves the distribution of livestock to selected farmers for rearing, who will eventually pay back in kind for supply to other farmers.

The programme, which spans the period 2019-2023, is meant to develop a more competitive and efficient livestock industry which will increase domestic production, create jobs and reduce the importation of meat products.

Animals to be involved in the project are sheep, goats, pigs, cattle, chicken and guinea fowlsL

Launching the programme, President Nana Akufo-Addo said the Upper West Region had been selected for the launch because it had the potential for commercialising agriculture.

He lamented the fact that for the past 20 years animal rearing had dwindled in the country, resulting in Ghana spending more than $400 million annually to import meat products, as 81 per cent of the meat consumed in the country was imported.

For that reason, the President said, various strategies had been employed to sustain the programme, including the supply of improved breeding livestock, the development and conservation of feeding grounds and water resources, improvement in livesock extension services and farmer education and disease control and surveillance to avert any unforeseen disasters.

To buttress that, he said, all agricultural stations in the country that had been closed down would be revived to ensure the production of improved livestock and offer infrastructural support such as housing, equipment and plants.

“The breeding stations that were closed down at Wawase in the Eastern Region, Wulugu in the North East Region, Doba in the Upper East Region, Busa in the Upper West Region and Wenchi in the Bono Region are being revived,” he said.

Besides, he indicated that under the programme, the Wawase Cattle Ranch, currently in operation in the Afram Plains and accommodating some 3,000 cattle, would be replicated in regions that experienced farmer-herdsmen conflicts or serve as corridors for the transhumance.

President Akufo-Addo said the farmers would be trained to develop their own large ranches that could compete with those in other countries.

He said raising rural incomes had the economic benefit of enlarging the domestic market for most of the industries which would be set up.

With the support of the people, he expressed the hope that the programme would increase meat production by 41 per cent and poultry by 400 per cent and generate employment for over 1.5 million people.

The President charged the Ministry of Food and Agriculture (MoFA), the implementing ministry, to sensitise the people to accept the programme, which was meant to raise standards of living, adding that that would make agriculture attractive enough for the educated youth who could introduce modern methods into it.

“All other promises will be fulfilled before the end of my tenure of office,” President Akufo-Addo said.

The Minister of Food and Agriculture, Dr Owusu Afriyie Akoto, said his ministry would revamp livestock production in the country with the introduction of the programme.

He said the RFJ was to complement Planting for Food and Jobs and Planting for Export and Rural Development which had both proved successful so far.

That, he said, was because agriculture remained the backbone of the economy and that the government was all out to ensure that it was given the necessary assistance.

The minister said the focus of MoFA had changed from ensuring food security to increasing the incomes of farmers to improve the standard of living of the rural poor.

The Upper West Regional Minister, Dr Hafiz Bin Salih, called on the people to embrace the programme, which was meant to give employment to them, in order to reduce rural poverty and improve upon the standard of living of the people.

He gave an assurance that the programme had no political strings attached but only needed dedicated and committed farmers.

He mentioned the Wa, Sissala West, Nandom, Jirapa and Wa East districts as the selected districts in the region where the pilot projects would be implemented.