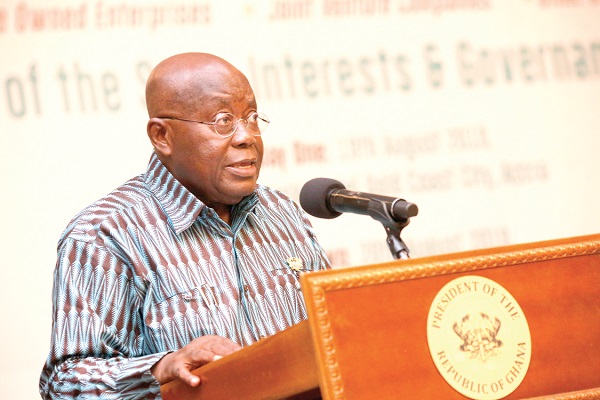 It will also neutralise the role played by the Ministry of Finance in state-owned enterprises and joint venture companies.

The authority has an additional mandate to streamline aspects of the operations of the entities it replaces, develop a code of corporate guidelines to promote sound governance for institutional performance and inject in them some private sector practices to make them profitable.

Parliament passed the State Interests and Governance Authority (SIGA) Act, 2019 (Act 990) in April 2019, and the President assented to it in June.
President Akufo-Addo said unlike previous regimes, the current provisions in the act would ensure that activities of state-owned enterprises and joint venture companies were monitored to ensure that aspects of their operations were streamlined.

He explained that section four of Act 990 also required the development of a code of corporate governance to guide and promote sound governance, assist the

Minister of Finance to assess borrowing levels of State-owned Enterprises (SoEs) in accordance with the Public Financial Management Act, 2016 (Act 921) as well as ensure that dividends due the state were paid.

President Akufo-Addo also said section seven of the act would ensure that board members and chief executives who flouted rules and regulations with impunity would be fined up to 3,000 penalty units or imprisoned for between five and 10 years.
He said it was the expectation of the people that SIGA would collaborate with other agencies to accelerate the development of Ghana beyond aid.

The President further observed that various enterprises were established and joint ventures entered into by successive governments to operate in critical sectors of the economy to produce goods and services, offer employment for the people and improve the living standards of the people since independence.

He said over the years many reforms were also introduced, while the State Enterprises Commission (SEC) was also supported to deliver the needed results, but failed to achieve their objectives.

President Akufo-Addo said aside from failing to sustain growth, they could not also honour their tax obligations, pay salaries of staff and dividend to the government in the last 10 years.

Some of them could not also prepare annual accounts for auditing, while others did not undertake basic maintenance culture.
He added that apart from those on divestiture, the government had equity interest in 103 state enterprises in key sectors of the economy.

The Minister of Planning, Professor George Gyan-Baffuor, bemoaned the nature and attitude of some of the SoEs, joint venture companies and other state entities who for years had failed to submit audited reports and paid dividend.

He said the new authority would demand accountability and transparency from the managers of those entities and also deal with failures by some of the SoEs to submit audited reports.

The minister said entities that would be under the SIGA included five regulatory bodies, eight joint ventures, eight mining companies and 40 SoEs.