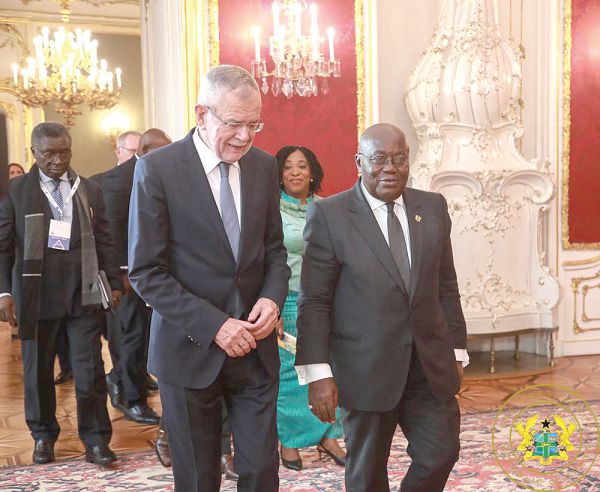 President Nana Addo Dankwa Akufo-Addo has made a case for Austrian manufacturing concerns to invest in Ghana’s One district, One factory (1D1F) initiative.

He said Ghana had started moves to realise its industrialisation drive to add value to its raw materials for both local and international markets, create jobs for the people and wealth for the nation and urged Austrian companies to buy into the programme.

President Akufo-Addo made the case for the country during a closed-door meeting with the Austrian President, Mr Alexander Van der Bellen, in Vienna, Austria, yesterday.

President Akufo-Addo, who is the co-Chair of the UN Secretary General’s Group of Eminent Advocates on the 2030 SDGs, is in Austria for the R20 Austrian World Summit.

The meeting is an initiative which is helping regions, countries and cities to implement the United Nations Sustainable Development Goals (SDGs) and for them to meet the global climate protection targets outlined in the Paris Agreement.

President Akufo-Addo will participate in the high-level panel discussion on the need for leadership to take responsibility in the global process on sustainable development and international co-operation.

As part of his short stay in that country, he will also hold bilateral talks with the Austrian Chancellor, Mr Sebastian Kurz; the President of Hungary, Mr János Ader, and the CEO of the World Bank, Kristalina Georgieva.

He is also scheduled to interact with members of the Ghanaian community in Austria.

Briefing journalists after President Akufo-Addo’s meeting with the Austrian President, Ghana’s Foreign Minister, Ms Shirley Ayorkor Botchway, explained that Austria had a strong industrial base that underpinned its economy.

On that basis, she said, Ghana was looking at forging partnerships to feed into its industrialisation drive, specifically the 1D1F agenda.

Ms Botchway said Ghana was of the strong conviction that it could tap into the expertise and experience of Austria, which is one of the leading countries in the use of renewable energy.

‘These days, there is no need to re-invent the wheel; if it took some countries over 20 years to get to a point, all you need to do is learn from best practices,” she said.

The minister explained that already some Austrian companies had established a foothold in Ghana, especially in the health sector, saying the two Presidents discussed their work so far and the need for the two nations to work together beyond multilateral to bilateral levels, particularly in economic development.

She said Ghana had benefited from some support in the form of soft loans from the Austrian government and that it felt the need for the good relations that had existed between the two nations for years to be enhanced.

The Foreign Minister stated that Austria, with a strong industrial base that underpinned its economy, was a good partner to deal with.

She said the issue of terrorist attacks in parts of West Africa was part of the agenda of the meeting of the two leaders.

She said President Akufo-Addo made a strong and convincing case for assistance from the developed world to nip the threat in the bud.

She explained that the President traced the trajectory of the spread of illegal arms and ammunition that had fuelled the activities of those terrorist groups who were wreaking havoc on Ghana’s neighbouring nations to the Libyan crisis and asked for all hands on deck to halt them in their tracks.

The President of Austria, Mr Van der Bellen, for his part, passed a vote of confidence in the management of Ghana’s economy in the last 28 months, which, he said, had made it the most preferred investment destination for Austrian investments.

He said the outstanding management of Ghana’s economy had positioned it as the fastest growing economy in the world in 2019 and the most attractive investment destination for the Austrian business community.