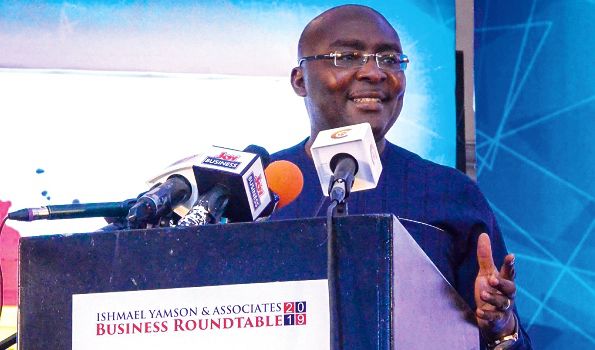 The Vice-President, Dr Mahamudu Bawumia, has lauded the private sector for effectively partnering the government to deliver on its development programmes and projects.

He said the private sector was a partner in the development process, not a competitor, and, therefore, as a country aspiring to be the most business-friendly destination in Africa, the sector would be the main driver.

The event, which was on the theme: “The Ghana we want”, sought to encourage young and potential business people to share ideas and network among themselves.

He mentioned, for instance, the port reforms initiated with the private sector and carried out at no cost to the government, automation at the Driver and Vehicle Licensing Authority (DVLA) and the Passport Office and the national identity card and added: “So we have to bring the private sector on board to bring about the transformation that we want because it turns out to be a more efficient sector than the public sector.”

The Vice-President was hopeful that the passage of the Companies Act earlier this month would significantly improve the business environment in the country.

The Ghana we want

Speaking on the theme, Dr Bawumia said: “The Ghana we want should be supported by a sound financial system” and noted that the consolidation of banks from 34 to 23 and the strengthening of bank capitalisation had resulted in a well capitalised sector, well positioned to improve the flow of funds in the economy and drive private sector growth and development.

That, he explained, must enhance access and delivery of public services, including health, pointing out that efforts intensified to improve the reach of the National Health Insurance Scheme (NHIS), the increase in the share of the District Assemblies Common Fund (DACF) to persons with disability and expanding the school feeding programme were all intended to deepen inclusion.

The Vice-President said due to a large segment of the society being informal, access to services had to change “if we are aspiring to become a modern middle-income country”.

Except for the past two decades, Dr Bawumia said, the path of Ghana’s economic history had been erratic, with average real Gross Domestic Product (GDP) growth being barely one per cent between 1971 and 1990.

He noted that even then, rapid growth since 2000 had not by itself translated into structural transformation nor delivered the envisaged Ghana.

“The economy remains undiversified, with unprocessed agricultural, mineral and oil exports. Our merchandise exports are concentrated in unprocessed raw materials; our manufacturing value and agricultural productivity remain low, and so is the application of technology in both industry and agriculture,” he added.

Dr Bawumia said while overall poverty had fallen noticeably, thanks to strides made in economic growth and the government’s social intervention programmes, the country still faced an increasingly unequal society, saying that the growth in the last two decades had not been inclusive. “The benefits of the growth and poverty reduction are unequally distributed and substantially slow, especially with the threat of growing youth unemployment. But it’s not all doom and gloom, as a lot of progress is being made,” he noted.

The Convenor of the 2019 Business Roundtable, Mr Ishmael Yamson, in his remarks, urged Ghanaians to support the digitisation programmes of the government, since the current manual system of doing things bred corruption.

He, therefore, called for the institution of measures for the sustenance of the programmes after they had been implemented.

A resource person, Mr Kwame Asante, said Ghana would be able to improve its revenue collection when it adopted a digital economy.

He also urged Ghanaians to reposition themselves for the “Fifth Generation (5G) technology” which, he said, would be launched by the end of this year, indicating that that would deliver about three million jobs.