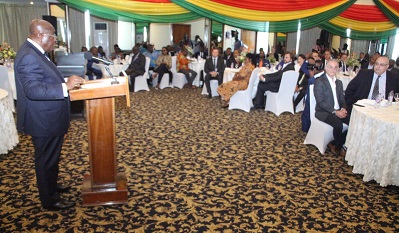 President Nana Addo Dankwa Akufo-Addo has asked the Governor of the Bank of Ghana (BoG) to take another look at the existing interest rates in the country.

He said a downward review of the interest rates was crucial in making the private sector competitive to help deliver a Ghana beyond aid.

Addressing the Chief Executive Officers’ (CEOs) Executive Forum in Accra yesterday, the President said: “I have requested the Governor of the Bank of Ghana to interrogate the issue of high interest rates in Ghana and how the problem can de addressed to enhance the competitiveness of the private sector.”

He said although the government had succeeded in stabilising the economy through improved micro-economic indicators over the last two years, high interest rates were still affecting the profitability of businesses.

The current interest rate by the Central Bank is 16 per cent but the President said it needed to be brought down further to create an enabling environment for businesses.

“I am committed to fiscal rectitude becoming an essential feature of our DNA in the management of our public finances and national economy,” President Akufo-Addo said.

The CEOs Executive Forum is part of the government’s comprehensive public-private partnership (PPP) dialogue framework designed to provide structures to institutionalise mechanisms for consultation between the government, and the public and private sector actors.

Also in attedance were CEOs from top private sector organisations and business entities.

President Akufo-Addo underscored the important role the private sector played towards national development and stressed that the programme that was being rolled out by the government was meant “to bring prosperity to our people by working closely with the private sector to transform the economy.”

The President announced the establishment of a business regulatory reform programme that would help institutionalise structures for sustained dialogue between the government, public sector institutions and the private sector.

He said the initiative, which would be spearheaded by the Ministry of Trade and Industry (MOTI), was meant to provide the stakeholders with a common platform for enhanced consultation on government policies, business regulatory frameworks and compliance regimes.

Among others, he said the programme was focused on targeted reforms to sustain the ease of doing business, create a one-stop-shop registry of all business regulations, a permanent public-private dialogue mechanism and targeted regulatory reliefs for small and medium-scale enterprises (SMEs).

The President explained that one of the seven-point agenda that would be pursued under the reform programme was targeted reforms to ensure that the country improves and sustains its ranking on the World Bank’s Ease of Doing Business Report.

“There will also be a one-stop-shop registry of all business regulations which will ensure that the inventory of business-related statutes, legislative instruments (LIs), regulatory notices and administrative directives are available in a single electronic registry.

“This will provide businesses with an easily accessible and one-stop repository of up-to-date information on all business regulations in the country,” he said.

The President stated that the business reform programme also had a web portal component for public consultation with the government on business-related policies, legal and regulatory changes.

“Minimum standards for transparency in public consultation will be introduced, including a consultative schedule published on the portal with timelines for receiving inputs from interested stakeholders,” he said.

President Akufo-Addo added that a regulatory impact assessment would also be introduced as part of the reform programme to build a permanent system for quality control of new business regulations.

He also said targeted regulatory reliefs would be introduced to grant SMEs at the early stages of development, reliefs from regulatory requirements to stimulate higher levels of entrepreneurship.

President Akufo-Addo said although the government inherited an ailing economy in 2016, it had made modest gains in terms of macro-economic stability and creation of a good business environment.

He gave an assurance that more initiatives would be put in place to translate the impressive macro-economic indicators into a stable business environment for the private sector to thrive.

The President stressed that the reforms being rolled out in the programme, as well as other fiscal policies by the government were meant to strategically position Ghanaian businesses in a better position to take advantage of the African Continental Free Trade Area (AfCFTA).

“AfCFTA comes with a market of 1.2 billion people and a combined gross domestic product (GDP) of $3 million across the 54 member countries of the African Union (AU) that have signed the agreement. Ghanaian businesses should strive to be the front line actors in the AfCFTA,” he said.

In a speech, Mr Kyerematen said the business regulatory reform programme was a step in the right direction, given the fact that there was currently no institutionalised structure for long-term engagement between the government, public and private sector stakeholders.

He noted that the lack of such a structure had resulted in the introduction of policies and regulations that were inimical to the interests of private sector and bred mistrust and lack of compliance for policies.

“In business, the critical investor decisions are made by the CEOs and that is why initiatives that will provide effective dialogue between government and the CEOs are important,” he said.

Mr Kyerematen added that unlike previous initiatives under previous governments, the current business regulatory programme was inclusive and well coordinated to make the desired impact.

He said a secretariat had been set up to coordinate all the ideas that would be generated at the national, regional and district business consultative fora to be harmonised into the annual Presidential Business Summit.

The minister said a business compact would be signed at the Presidential Business Summit, detailing the consultations throughout the year.

“We will clearly define performance indicators, indicating the government’s commitment to the private sector and the expectations from them,” he said.