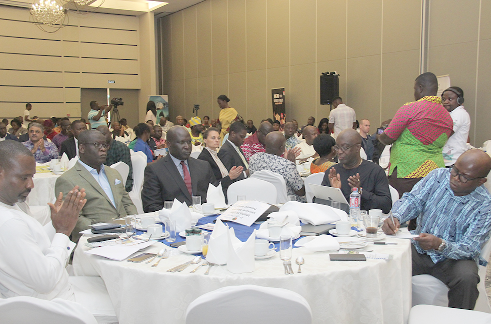 THE Chief Executive Officer of the Ghana Investment Promotion Centre (GIPC), Mr Yofi Grant, is optimistic that a rebound in foreign investor confidence in the banking industry will spur economic growth, beginning this year.

This follows the completion of the Bank of Ghana’s (BoG) reform in the sector which also saw  the recapitalisation of the banks from GH¢120 million to GH¢400 million.

He said investors, both home and abroad, had recognised the soundness in the economy following the reforms which had produced a stronger and resilient banking sector.

Mr Grant, who was addressing a packed hall of business executives and representatives of the BoG at the GIPC CEO’s Breakfast Meeting in Accra last Friday, said as a result of the positive outlook of the financial sector, the country was likely to experience a rise in Foreign Direct Investments (FDI’s).

“Anytime I meet investors both in the country and outside the country, the major discussion is always on the financial sector and the reforms by the Bank of Ghana which they expressed confidence that it will spur economic growth.

“It is very important for investors to see that the reforms in the banking sector are strong and resilient, as it’s been cleaned up, because if it hadn’t been cleaned up, it would have been worse than it used to,” he said.

Mr Grant noted that the private sector needed a robust financial sector to expand, explaining that “any policy reform that will help in that direction is welcomed”.

The reformation
The implementation of the two reforms saw nine banks collapse, one downgraded from a universal bank to a savings and loans company and five which are being supported through a government-sponsored arrangement to enable them to meet the GH¢400 million capital requirement.

The exercise started in early 2017 and aimed at cleansing the sector of banks considered weak and insolvent and posing a major risk to the soundness of the banking sector and the economy in general.

It cost the country an estimated GH¢12 billion.

Industry support
Mr Grant commended the effort by the central bank to strengthen the banking sector as it presented Ghana as a vibrant and attractive investment destination.

“I can assure you that our international investors are behind you and we at the GIPC fully support all the reforms that are aimed at strengthening the banking sector,” he said.

However, he called on the central bank to work at reducing the cost of borrowing to reduce the burden of businesses.

He said the high cost of interest rates was a major concern for the private sector.

“As the Ministry of Finance works hard to strengthen the fundamentals of the economy, I believe the Bank of Ghana through very strong monetary policy initiatives will also bring down the cost of money and make sure that the financial sector is able to support industry and trade.”

Deposits pick-up
Meanwhile, the Head of Banking Supervision at the BoG, Mr Osei Gyasi, revealed that bank deposits had significantly risen over the last few months after the banking sector reforms.

Speaking on the theme, “Policy Perspectives of Opportunities Created by the Reform”, Mr Osei Gyasi said there had been improved customer confidence among traders that banks that survived after the reforms were capable of holding their funds.

“The information we’re getting indicates that there is a growth in deposit after the reform. This is because most of our market women and traders now believe that the remaining banks that survived the reform are strong and capable of managing their funds.

“There has been a growth in confidence, which is resulting in the deposit growth. We at the Bank of Ghana shall continue to implement the various laws and policies that have been enacted to see a robust banking sector. We are committed to fully implementing all the regulations that will see the Ghanaian banking sector grow to the highest,” he said.