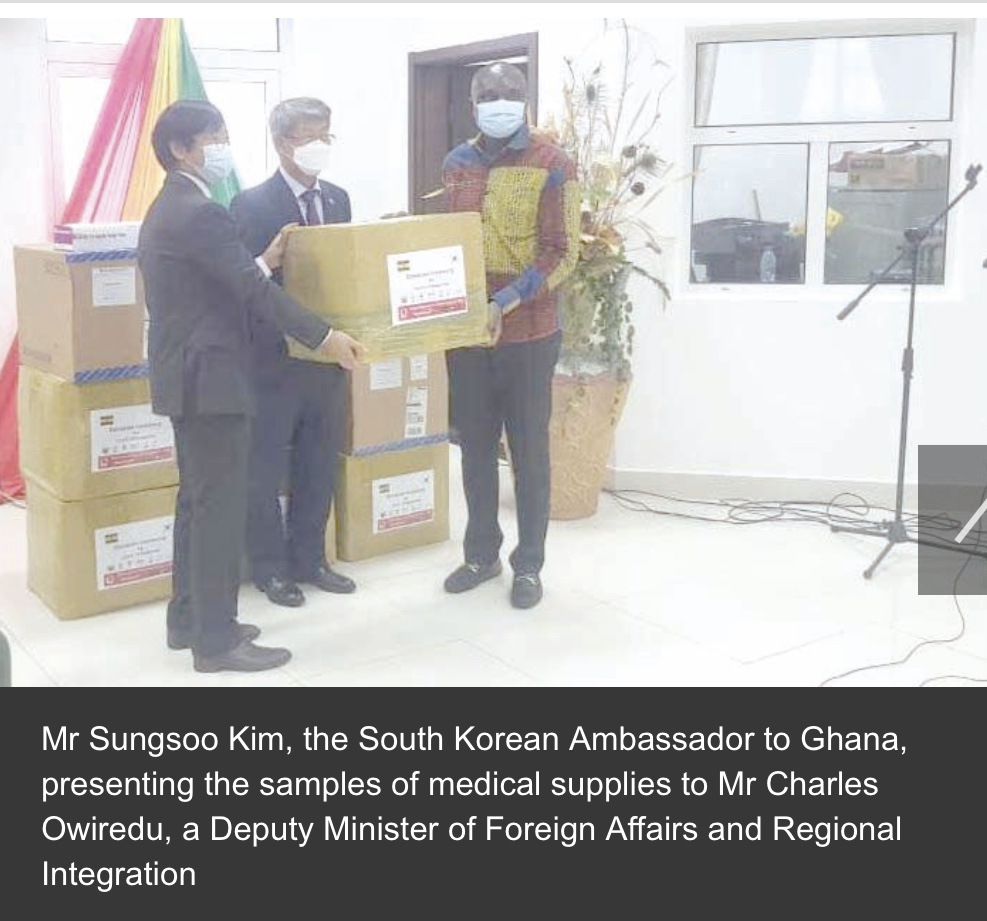 The Republic of Korea has supported the national COVID-19 response efforts with essential medical supplies worth about GH¢2.26 million ($393,000).

The support is in the form of $200,000 from the government of South Korea, through the Korea International Development Agency (KOICA), while the remaining $193,000 is a contribution by the Korea Foundation for International Healthcare (KOFIH) and SD Biosensor and Good Neighbours, both Korean non-governmental organisations.

The Korean Ambassador to Ghana, Mr Sungsoo Kim, who presented the items to the Ministry of Foreign Affairs and Regional Integration in Accra last Friday, said a cure was yet to be found for the virus that struck the world late last year.

He said the nature of the pandemic required the collective effort of the international community to facilitate the fight efficiently.

Mr Kim said although no country had been able to eradicate the disease, some were ahead of others in terms of response, saying such countries needed to support those lagging behind for the successful containment of the virus globally.

Prior to the outbreak of the pandemic, KOICA had begun a $9-million project with the Ministry of Health to strengthen primary healthcare in all 15 districts in the Upper East Region.

According to the Korean Envoy, the project was aimed at improving community-based primary healthcare through the Community Health-based Planning Services (CHPS) system.

He pledged his government’s continued support to Ghana.

A Deputy Minister of Foreign Affairs and Regional Integration, Mr Charles Owiredu, who received the items, expressed gratitude to the South Korean government and other donors for their timely intervention.

He said since the outbreak of the COVID-19, the Ministry of Foreign Affairs had been at the forefront of coordinating international support for Ghana’s fight against the pandemic.

“The ministry, together with its missions abroad, has been working tirelessly not only to guarantee the interest and welfare of the country and Ghanaians abroad but also mobilise resources and goodwill to support Ghana’s fight against the deadly virus,” he added.

He said South Korea’s response attested to the long-standing and exemplary relations between the two countries, spanning over four decades.

Mr Owiredu expressed the hope that the combined efforts of all institutions, both public and private, would yield the right results and eventually bring businesses back to normal in the country.

He bid farewell to two councilors at the Korean Embassy in Ghana — Mr Joeng Dongik and Mrs Kim Jeeyoung — who ended their duty tours in Ghana last Friday and are due to return to Korea tomorrow.