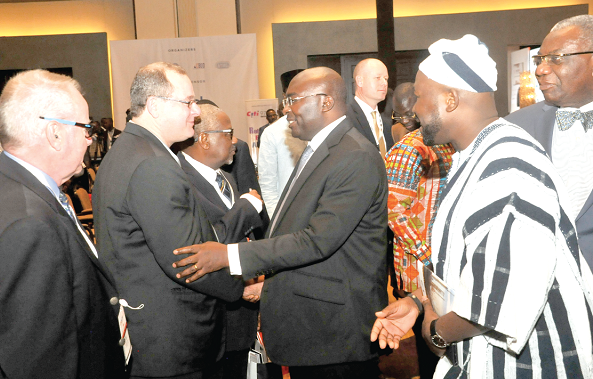 The Vice President, Dr. Mahamudu Bawumia has encouraged petroleum service providers in the country, especially BulkOil Distribution Companies (BDC’s), to develop their capacities by consolidating the businesses to compete favorably with multinational companies

He said mergers should not be seen as a step to loss of ownership but rather as a strategy which would enhance growth and competitiveness in the long run.

“Instead of going solo, consolidate your businesses to be able to list on the Ghana Stock Exchange (GSE) to raise the needed capital to expand your businesses, as well as venture into other markets,” Dr Bawumia urged them.

Addressing the opening of a three-day conference on petroleum in Accra, the Vice-President said it was important that the petroleum service providers, especially the BDCs, changed their business models to respond to the hub plans, as there would be more products for exports than the current model of importing the shortfalls in production.

This year’s Ghana International Petroleum Conference is the second since its introduction in 2015. It was on the theme: “Realising the vision of a petroleum hub in Ghana,” and sought to offer participants both local and international, who are mainly stakeholders in the industry, an opportunity to meet and discuss pertinent issues concerning the sector, share their thoughts and expertise and put together views that would shape the policy and regulatory landscape of the Ghanaian petroleum industry.

Dr Bawumia said it was the plan of the government to develop the country’s petroleum downstream, with the goal of ensuring that crude oil produced in Ghana was refined in the country to add value to it and to develop the petrol chemical industry.

“Developing Ghana into a petroleum hub for refined petroleum products is one of the important growth pillars envisaged for our economy, hence a very useful conference which would help discuss how government’s vision could be translated into strategies and into realistic plans for implementation,” he noted.

Tracing the history of Ghana’s oil discovery in 2007, the Vice-President said the industry, prior to the discovery of oil in commercial quantities, was dominated by downstream activities, but grew from one dominated by the government to a deregulated one, which accommodated both government and private stakeholders.

These measures, Dr Bawumia explained, brought some level of competition into the pricing of petroleum products in the country.

He, therefore implored the participants to undertake a comprehensive review of the deregulation policy and its implementation to determine if the intended objectives had been achieved.

“The review should also focus on petroleum pricing formula. This is needed to ensure that areas of the formula that have not yet been deregulated such as transportation, infrastructure of petroleum products in all its forms, could be reviewed and deregulated to enhance competitiveness and market efficiency,” he charged.

On a financing policy which was being developed by the Ministry of Energy for the petroleum downstream industry, Dr Bawumia explained  that “the goal of this policy was to provide strategies towards developing the capacities of petroleum service providers to become competitive and to be able to venture into other markets.”

“The concept of a petroleum hub is one of the government’s strategic anchor initiatives that would serve as a new pillar of growth in the Ghanaian economy.” He stressed and added that, “the project would accelerate the growth of Ghana’s petroleum downstream sub-sector and make it a major player in the economy and consequently, ensure the development of sustainable value wealth creation and the progress of industry.”

The development of a hub in Ghana, the Vice-President further explained, would require an increase in the country’s refining capacity beyond the current level to meet domestic demand and for export.

He, therefore, urged the participants to come up with contributions and ideas which would be very instrumental in helping the government to achieve this vision.

The Minister of Energy, Mr Boakye Agyarko, indicated that a task force which was to oversee the development of an infrastructural master plan and a road map for the realisation of the vision of a petroleum hub in the country had concluded that the proposal was feasible.

He told the conference participants that it was thus  the responsibility of his ministry to ensure that the vision of making Ghana a hub of petroleum was achieved as a nation.

Mr Agyarko said the government was ready to pay 10 per cent of an estimated $50 billion of investment fund required to build the relevant infrastructure such as roads, electricity and water needed at the hub.

He, therefore, called on the petroleum service providers to position themselves well to be part of the initiative, as the government took steps to review some of the policies governing the country’s downstream petroleum industry.

The Chief Executive of the National Petroleum Authority (NPA), Mr Alhassan Tampuli, for his part, spoke about a number of reforms that were being implemented in the downstream to make the industry a better place to do business and said Ghana’s stability among other successes in its macro economy would contribute to the creation of an attractive business environment in the country.