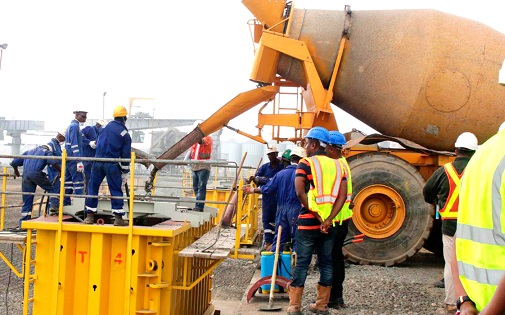 Expansion works on the Takoradi Port have started with the construction of a multipurpose on-dock Atlantic Container Terminal.
At the Takoradi Port last Thursday, the Chairman of Ibistek, Mr Kwame Gyan, told journalists that the first phase of the project, which is expected to be completed within 24 months, was being financed partially by the African Finance Group (AFC) following a withdrawal by the African Development Bank (AfDB), the initial financiers of the project.

Ibistek, he said, was providing a 50 per cent equity of $200 million which it had since secured through the capital market, while the AFC Group, headquartered in Nigeria, was providing the debt component of the funding.

“Already, the $200 million has been secured to cater for the completion of the first phase of the project which would see the completion and operationalisation of the two berths, while the additional berths will be created under the phase two,” Mr Gyan stated.

He said Ibistek was anticipating an increase in container cargo traffic to the Takoradi Port, and employment and revenue generation through transit trade.

The company had also invested in the development of access roads to the port, linking the project to the off-dock devanning terminal that was previously built, which, he said, had seen a significant increase in container cargo vessel call to the port.

“The port has, therefore, been earmarked for development and upgrades to serve container vessels with higher efficiency, while the other berth at the port will continue to be managed to meet the demands of, especially, the oil and gas services cluster,” Mr Gyan stated.

Similarly, arrangements had been made to source supplies from local sources for the installation of the quay walls and other ancillary facilities on the project.

“For now, we want to make progress as fast as we can, since we have lost significant time for the construction, and we want to make up by speeding up so we can hand over the berths within the 24-month schedule,” he stated.

The Supervision Leader at Royal HASKONING, technical supervisors of the project, Mr Ivar Schols, said  quality control was key to ensure that the project’s quality specifications were met.

“We will be monitoring the contractor’s quality control systems, where periodic system audits will be undertaken, and detailed quality checks on the concrete mix, product specifications and environmental audits, to ensure that the infrastructure being developed can stand the test of time,” Mr Schols stressed.

The Director of the Takoradi Port, Capt. Ebenezer Afadzi (retd), indicated that the Atlantic Terminal project would ensure that the Takoradi Port would compete fairly with other terminals within the West African sub-region.

That, he said, would ultimately lead to an increase in revenue for the Ghana Ports and Harbours Authority (GPHA) and the government as well.