Telcos, fintechs to follow GhIPSS in reintroducing fees on all MoMo transactions 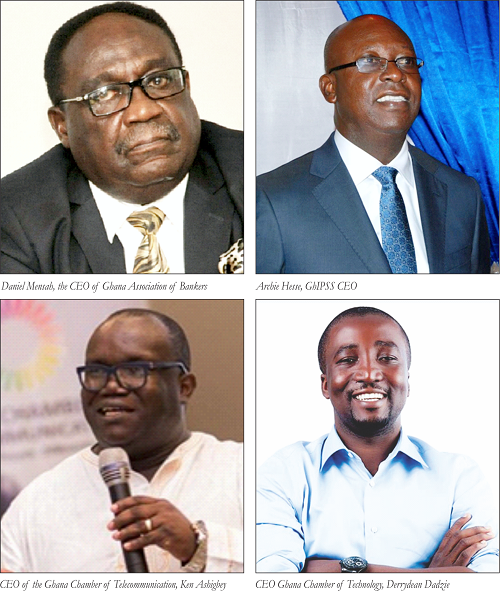 Telecommunication networks and financial technology companies (fintechs) are exploring options to reintroduce fees on all mobile money transactions even though the Bank of Ghana’s directive of no charges on some transactions for at least three-months – to alleviate the negative impact of COVID-19 on Ghanaians and also push a cashlite-to-cashless agenda – hasn’t elapsed.

The telcos and fintechs’ decision is a swift reaction to the Ghana Interbank Payment and Settlement Systems’ (GhIPSS) move on Monday evening to suspend the fees waiver on Mobile Money Interoperability (MMI), GhIPSS Instant Pay (GIP) and ACH Direct Credit – because the waiver on these three key products and services threaten its entire sustainable business module.

Even as the payment industry players, especially the telcos, look at what steps to take, in a meeting yesterday the Ghana Bankers Association (GAB) kicked against the move by GhIPSS to re-introduce the fees because it will undermine the integrity and credibility of the entire banking and payment system.

The Chamber of Telecommunication’s CEO, Ken Ashigbey, in an interview with the B&FT noted that even as the Chamber plans to meet the central bank soon, projections by members to sustain the waiver system for three months are no longer sustainable – and thus it has become imperative to end the waiver system.

“We are not even like GhIPPS which projected to use the check clearing house charges to support revenue shortfall; unfortunately for us, the mobile money operators, person to person income forms a huge chunk (about 90 percent) of the revenues that we make.

“What GhIPSS did also impacts on our revenue; the intra transfers among telcos had to be zero-rated, and that also affected GhIPSS. Definitely, this is a conversation that we as well were going to engage our regulators, the Bank of Ghana, to review. So, we are not really surprised at this; it is about the sustainability,” Mr. Ashigbey said.

Chief Executive Officer of the Ghana Chamber of Technology, Derrydean Dadzie, also said it is about time fintechs resumed their charges to make up for the loses they are incurring due to the waiving of some charges. According to him, this is critical to help sustain the infrastructure that some platforms depend on to run their operations.

Mr. Dadzie explained that some of the infrastructure for operations is foreign-based and players in the sector are obliged to pay for the services even though they have waived some of their fees; a situation that is also adversely hampering their ability to break-even.

“Already, the halting of movement and the restrictions on social gathering are hampering the number of transactions on our platforms. When people move, that is when we see more transactions. We are already challenged with the restrictions and partial lockdown that we experienced, and this is a welcome decision from GhIPSS,” he said.

He added that, at the moment, there is no conversation on the review of charges among fintech companies, even though they have experienced some huge losses in the about-two months of the waiver implementation.

Even as GhIPSS, telcos and fintechs look to stop the fees waiver, the Ghana Association of Bankers has described the GhIPPS decision as unilateral and bad for the image of the banking sector.

The Association has therefore called for halting the decision until a firm conclusion is arrived at after a meeting with GhIPSS and Governor of the Bank of Ghana.

In a response-letter to the Bank of Ghana, the Association said: “While we share in the expression of financial burden being borne by all actors in the financial services sector who have implemented various forms of concessions during the pendency of COVID-19, we do not agree with any unilateral withdrawal of waivers contrary to pronouncements made to the public”.

The letter further said: “Banks, as collecting agents for GhIPSS, have in reliance of the waiver communicated to our clients that the waiver of fees on digital platforms and other alternate channels for banking will be in force throughout the pendency of the epidemic.

“Any unilateral withdrawal of the waivers by GhIPSS will be detrimental to the image and credibility of the banking industry. We are therefore by this letter calling for a meeting with GhIPSS and the Governor of the Bank of Ghana to urgently discuss this emerging development; and will respectfully ask that until such meeting is held and firm decision taken, GhIPSS suspends the decision taken on withdrawal of the waivers.”

Since March 20, 2020, all mobile money transfers of up to GH¢100 daily have been free of all charges; a development which has not only hugely affected the bottom line of players in the sector but also threatened their sustainability. The biggest telecom service provider MTN’s 2020 first quarter financials have shown that the company’s mobile money revenue grew strongly and benefitted from an increase in mobile money subscribers over the first three months of 2020.