Unite for the development of Ghana – President Akufo-Addo 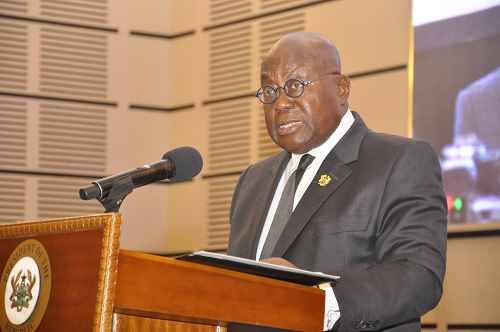 President Nana Addo Dankwa Akufo-Addo has urged Ghanaians to unite for the accelerated development of the country.

He has also called on the people to cultivate the culture of tolerance to preserve the stability, peace and security of the country.

“We hear a lot of rumours when elections are approaching; we must unite for the security of Ghana. We must preserve the peace and stability that we are enjoying as a country. Belonging to different parties does not imply we should not tolerate one another. We must live in togetherness,” he added.

President Akufo-Addo made the call when he joined the congregation of the St George Catholic Church in Koforidua to worship as part of his three-day tour of the Eastern Region.

The President’s entourage included the Minister of Information, Mr Kojo Oppong Nkrumah; the Minister of Trade and Industry, Mr Alan Kyerematen; the Minister of Agriculture, Dr Afriyie Akoto; the Minister in charge of Security, Mr Albert Kan-Dapaah; the Eastern Regional Minister, Mr Kwakye Daffour, and the Chairman of the Council of Elders of the New Patriotic Party (NPP), Mr Hackman Owusu Agyeman.

The President, reassured Ghanaians that the CSE policy, which became a national debate, would not be implemented, saying parents should not worry about it.

“Following the argument on the CSE, I again affirm that it will not be implemented in our schools.

I am aware people want us to take action, and not let it be political talk.

I affirm that I will do it for them to know that it was not just a political statement that I made.

I have a lot of respect and love for Ghanaians.

Therefore, I will never take any action that does not serve the interest of Ghanaians,” he said.

Speaking in Twi, the President said the government was delivering on its promises one after the other.

“When you observe the performance of the government, you will realise that we are delivering on the promises we made to Ghanaians one after the other.

We will continue to work to deliver on the promises we made to Ghanaians,” he said.

The 5.1-kilometre road, which will have a bitumen surface, is expected to facilitate the evacuation of farm produce from the area to big towns in the region.

In Begoro, the residents defied the rains to welcome the President and his entourage.

He also inspected the Nkawkaw town roads and visited the Nkawkaw Senior High School (SHS), where he gave an assurance that infrastructure development in the school, including the provision of a bus, staff bungalows, dining and assembly halls, would gradually be taken care of.

President Akufo-Addo advised the students to study hard to justify the introduction of the free SHS policy and expressed the commitment to make sure that SHS education remained free to give the opportunity to all Ghanaians of school age to be in school.

“I know some individuals are not excited about the free SHS policy, but I declare emphatically that the policy has come to stay and no Ghanaian shall be deprived of education,” he added.

The Minister of Education, Dr Matthew Opoku Prempeh, said 56,000 people had so far been employed in SHSs, while1,500 kitchen support staff would be engaged by the end of this month to beef up the human resource requirement in the various SHSs in the country.

He said more facilities would be provided in schools to promote effective teaching and learning.

The Headmaster of the Nkawkaw SHS, Dr Robert Osei Forson, said the school lacked adequate infrastructure to contain the growing number of students and appealed for more facilities.