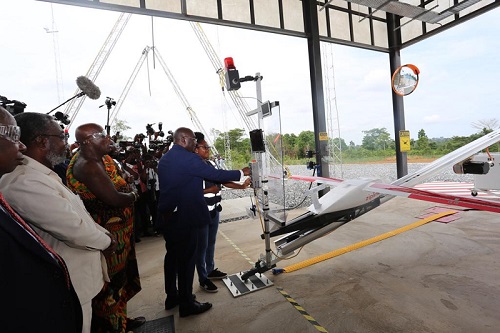 Access to vital health products is being hampered by the difficulty of supplying medicines from the central medical stores to remotely located patients; however, with the advent of drone technology that challenge will be a thing of the past, Vice-President Dr. Mahamadu Bawumia has said.

Speaking at the national launch of the ‘Fly-to-Save-a-life’ project (Zipline) at Omenako in Suhum of the Eastern Region, the vice-president explained that access to healthcare remains a difficulty, especially, to underserved patients, stressing that: “When and where they need it, this results in situations when people in need of live-saving care do not get medicine they need to survive. As a government, we cannot stand aside and watch our people die because they lack timely access to medical products”.

He maintained that the focus of government is to ensure that the health needs of Ghanaians are better served, adding that the project represents the biggest application of medical drone technology worldwide.

“The use of drones is presenting a significant opportunity in changing the health delivery needs of people around the globe; what we are doing is making it easy to deliver those essential healthcare products to hospitals and other health facilities across the country during emergencies.

“It will save the lives of people who may otherwise have lost them through childbirth, snake bites, accidents and other life-threatening emergencies.”

The Minister for Health, Kweku Agyemang Manu, indicated that the entire project represents a “game-changer in the country’s quest to deliver timely medical services”.

He also stated it will increase healthcare access for over 15 million people across the country, and disclosed that within the next two years all health facilities will go paperless.

The Okyehene, Osagyefo Amotia Ofori Panin, lauded the initiative but called for its sustainability – urging government to decentralise the country in terms of services to promote accountability, transparency.

The CEO of Zipline International, Keller Rinaudo, stated that his company’s desire is to deliver medical products as quickly as “Internet delivers information”.

According to him, the drone will make 600 deliveries daily and also have the capacity to save 600 lives – especially mothers and children.

The Zipline distribution centre at Omenako in Suhum is the first of three sites which are expected to house the drones and provide vital medical supplies.

For some it will serve the Eastern Region, some parts of the Volta, Ashanti and parts of Greater Accra; and subsequently, similar distribution centres will be put up at Mampong and in the Northern Region.

The Ministry of Health has selected 148 lifesaving medical products to be stocked at Zipline’s four distribution centres nationwide. Zipline will guarantee delivery of those products upon request to at least 1,500 health facilities served.

The deliveries of about 150 medical supplies, which include blood, blood products, and vaccines among others, will serve nearly 2000 health facilities across the country at full capacity.

On Tuesday, the company delivered two rounds of vaccines to the New Tafo Government Hospital in the Abuakwa North district of the Eastern Region by drones in a test run ahead of yesterday’s inauguration to check its readiness.

The drones delivered two rounds of vaccines from the Omenako Centre to the New Tafo Hospital — a distance that takes more than an hour to cover by road — in just 15 minutes.

The first drone delivered the vaccines to the hospital at 11:25am after it was launched at 11:10am, while the second drone arrived at 11:45am.

Zipline’s drone delivery service is dedicated to expanding healthcare access and saving lives around the globe. Health workers place orders by text message and receive their deliveries in 30 minutes on average. Zipline’s drones both take off and land from its distribution centers, requiring no additional infrastructure at the clinics it serves. Deliveries are made from the sky, with the drone descending to a safe height above the ground and air-dropping medicine by parachute to a designated spot at the health centers it serves.

Because the company’s drones criss-cross commercial airspace daily over both remote and populated areas on their way to deliver critical and lifesaving medicine to people in need, the safety and reliability of Zipline’s service is a top priority. Recently, the United States Federal Aviation Administration announced that it may require the U.S. commercial drone industry in future regulation to adopt the kinds of safety features Zipline has already put in place

The company has taken many steps to ensure that it is operating the safest delivery system of its kind in the world including rigorous testing of flight software and aircraft hardware; flight operations safety procedures; redundant inflight safety features; and modular frangible design.

The company works to improve the quality of its code and service every day to make sure it is operating the safest and most effective drone delivery operation in the world. All software updates are first put through automated software and hardware in the loop testing. allowing advanced algorithms to assess how the new code and aircraft would perform in the real world.

After passing through simulation testing, all new code is installed onto drones at our state of the art flight testing facility in Northern California, Codenamed Nest X, and pushed to the limits to validate performance. That process is repeated until the system and aircraft are ready to be deployed into global flight operations.

Flight operators physically inspect each aircraft and use cutting edge technology like computer vision during preflight checks to make sure each drone is fit for flight. Because Zipline’s drones fly autonomously along predetermined routes, all of our flight paths are registered in advance with civil aviation authorities.

Zipline is in direct communication with those aviation authorities so that they know at all times when drones launch and where they are flying. Zipline’s sophisticated air traffic control system uses advanced algorithms to make sure all drones in the air know where they are, where they need to go.

Zipline drones are designed to automatically detect issues inflight and safely return to base for repair. Each drone is equipped with redundant flight computers, motors, communications systems, flight control surfaces, as well as redundant navigation and power systems.

In the event of emergencies like severe weather, emergency requests from air traffic control or unplanned flight operation issues, each drone is equipped with a parachute that allows it to make an immediate landing by slowly descending to the ground.

The drones use parachute landings at least once a week during the the testing and diagnostic phase of beginning new distribution centers and delivery routes or when the company decides to make deliveries in the face of extreme weather to aid in emergency medical situations.

Zipline’s drones and its parts are designed to break on contact minimizing potential damage to things on the ground. The drone’s core navigation, power, communications, and computing functions are inserted into the drone as a single unit. That unit is housed within a carbon fiber chassis that is protected by an outer styrofoam shell, similar to construction of helmets. The styrofoam serves to protect anything on the outside of the drone as well as everything on the inside.

Damaged styrofoam is quickly replaced allowing the drone to return to service. The same is true for other flight modules, which include the motors, wings, tail fins and power, navigation and communications unit. If any one of those units experiences issues, it can be easily replaced witha new one so that the aircraft can return to service saving lives as quickly as possible.