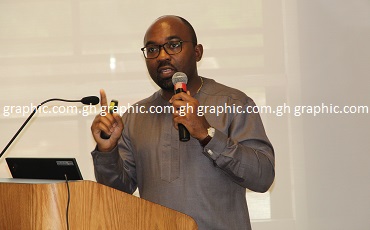 The Resident Representative of the International Monetary Fund (IMF) in Ghana, Dr Albert Touna Mama, has advised the government to pay critical attention to issues that can send the country back to a bailout programme with the fund.

He mentioned the high risk of debt distress, weak domestic revenue mobilisation, off-budget transactions and a high level of fiscal risk from the energy sector as issues that could erode the gains in stabilising the economy.

He said those were major foundations that the government needed to get right, since they constituted the very reasons for which Ghana kept on running back to the IMF for a bailout.

Dr Mama gave the advice at a roundtable workshop organised by a civil society organisation, the Economic Governance Platform, in partnership with the IMF and Oxfam, in Accra last Thursday.

The theme for the workshop was: “Tackling Ghana’s political budget cycle: Lessons for Ghana beyond the IMF”.

There was a panel that discussed what could be done in order to ensure that Ghana did not repeat the same mistakes after exiting its 16th IMF bailout programme.

In May this year, the IMF and the World Bank classified Ghana as a high-risk debt distress country.

The country entered the category in 2015 and has since been unable to exit due to strong growth in the debt stock and its impact on other related ratios.

In May, the Bank of Ghana reported that the public debt stock had peaked at GH¢198 billion as of March 2019, equivalent to 57.5 per cent of GDP.

Again, last month, the Finance Minister, Mr Ken Ofori-Atta, bemoaned the country’s low revenue mobilisation levels, stating that while Ghana had revenue-to-GDP ratio of 12.6 per cent, its peers in sub-Saharan Africa were registering 19 per cent.

On the debt distress issue, Dr Mama said it was crucial for more effort to be made to reduce the debt stock of the country.

He also stated that low domestic revenue mobilisation would have negative consequences for Ghana and called for more efforts to increase the tax-to-GDP ratio, which currently stands below 13 per cent.

He said it was even more worrying that 97 per cent of total revenue collected was absorbed by non-discretionary spending such as salaries and interest rates.

Off-budget transactions were the third issue he cautioned the government to be careful about.

According to him, financial expenditures which were not often factored into the budget created revenue rigidities.

He added that it also created difficulties in knowing the country’s true deficit and debt levels.

On fiscal risks posed by the energy sector, Dr Mama encouraged the government to find ways to deal with the high cost of fuel and power, as well as solve the low collection of electricity bills, including the non-payment practice of ministries, departments and agencies (MDAs).

The Chairman of the Tax Justice Network – Ghana, Mr Vitus Adaboo Azeem, who was a panellist at the workshop, expressed optimism that the strong enforcement of laws on revenue collection in the country would help solve weak domestic revenue challenges.

An economist and lecturer at the University of Ghana, Dr Priscilla Twumasi Baffour, called on the Ministry of Finance to set realistic revenue targets for the Ghana Revenue Authority (GRA) and also ensure that there was constant monitoring to ensure that the right things were done.

She also stressed the need for more efforts to transition informal firms into the formal sector, so that there would be enough data on their activities to ensure higher revenue collection.

On the energy front, the Executive Director of the African Centre for Energy Policy (ACEP), Mr Ben Boakye, said there was the need to enlighten Ghanaians more on the losses the country was incurring as a result of bad energy deals and contracts.

“This will ensure that the citizenry collectively raise their voice against such contracts, as has been done on other national issues,” he said.

The President of IMANI Africa, Mr Franklin Cudjoe, also called for efficiency in the use of revenue.

That way, he said, the citizens would see the need to pay their taxes regularly to ensure the development of the nation.