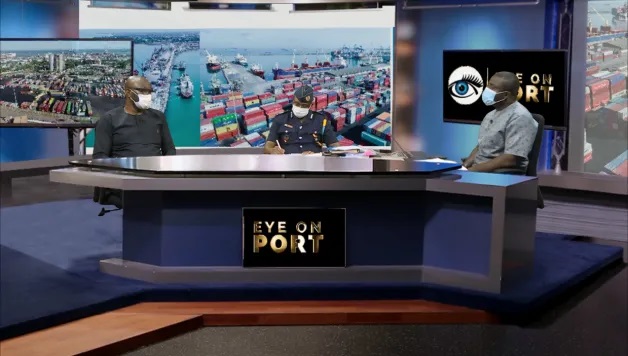 These initiatives are efforts the Ghana’s Revenue Authority as well as other African countries within the continental trade agreement are embarking on to ease the tariff burden on goods traded among member countries.

“7% of the tariff lines fall under sensitive products. That one we would liberalize but not immediately. We shall progressively reduce the tariffs over a period of 13 years.”

“For 90% of goods, we shall immediately remove our tariffs from them. Then the rest, which is 3%, is the exclusive.”

He made this revelation while participating in an Eye on Port discourse on Understanding the Trade Protocols in the AfCFTA from a Customs Perspective.

The Customs Official said party states to the AfCFTA have been given ample time to align their laws with that of the new trade protocols and this would go a long way to enhance customs cooperation.

“Member states have been given some time to make sure that they align their national laws with the AfCFTA agreement. So that, wherever any country will have to encounter contrary provisions against national laws, then you bring them into alignment.”

He said that to aid information sharing, an IT Committee has also been set up to facilitate the usage of a common platform for customs services. Product specific rules, according to the Customs official, would be adopted in this new protocol.

On the skepticism expressed towards the accuracy in determining the origin of traded products, Fechin Akoto allayed all fears, saying customs have in place mechanisms to enforce rule of origin.

“As customs, we have to know the features of Kenyan flowers for example, in comparison to flowers from the Netherlands. We should know fish from our waters and fish not from our waters. We have the training and skills to do so,” he maintained.

The Chief Revenue Officer of the Customs Technical Services Bureau also revealed that African Ministers of Trade have asked for the establishment of modalities for which free zone companies can trade within the AfCFTA.

“The technical working group is yet to come out with the modalities. Until then, I do not think the Free Zones will for now trade in the AfCFTA,” he confirmed.

He also highlighted that unlike ECOWAS, the AfCFTA has in place a conflict resolution system to take care of issues between trading parties.

Fechin Akoto also stated that a directorate where goods within the continent can be sourced from is being prepared to make trading convenient for Africans.

He also revealed that the Afreximbank is developing a special payment system that would allow payments to be done in the local currency to reduce the dependency on foreign currency on the prices of goods and services.

Fechin Akoto, the Chief Revenue Officer of the Customs Technical Services Bureau, clarified however that, whereas the duty component is free for goods eligible for trade with the African Continental Free Trade Area, other tax components like levies remain.

GUTA calls for increased education on the AfCFTA protocols

Members of the local trading public and civil society have expressed some level of concern regarding the understanding of the protocols guiding the trade agreement as well the full advantages it brings to the ordinary citizen.

Speaking on Eye on Port, the President of the Ghana Union of Traders Association, Dr. Joseph Obeng, re-echoed the sentiments of traders and solicited for more clarity on the trade protocols.

“I have been demanding some education, otherwise the expectation that they have is so huge that if care is not taken, we cannot even take off without encountering problems,” he bemoaned.

He called for access to information by economic operators and the trading public in order for them to benefit from the single continental market and urged customs to embark on aggressive training programmes that would educate the trading community on practices within the AfCFTA.

“Our ministries, Investment Promotion and Export Promotions are to deal with this and give us information. Not until the time we have adequate information, what are we travelling to countries like Cameroon to do?” he quizzed.

Dr. Joseph Obeng particularly asked for clarity in the rules of origin guiding the AfCFTA stating that it is a fundamental principle to the success of the regional trading pact.

“How are we going to define the nationality of a product? That must be defined clearly. Therefore we have to be educated to see whatever we are going to trade on,” he explained.

The GUTA president asked for significant incentives, especially with regards to taxes and tariffs to be given to local manufacturers and businesses as they would be in competition with goods and products from other continents.

“How are we going to access their products at a cheaper price from within? If we are going to trade within, then we are expecting that, the FOB prices that we are getting from Europe is what we have to get from Africa. So, when the tariffs are removed then we have an edge,” Dr. Obeng added.

He also highlighted the need for local traders to access cheaper credit services than that of competing markets, to encourage increased production.

“Our competitors are the third party countries in Asia, Turkey, the Americas, where we are going to compare. Where their interest rates are between 2-3 percent, sometimes 1%, our average is around 20%. If we are not able to sort these things out, and we think we are about to do trade among ourselves well, then we are bound to be disappointed,” he warned.

The GUTA President called for innovation within the Ghana’s banking system to protect the nation’s currencies and reduce dependency on western.

“We should device a very innovative means in the banking clearing system where we would not necessarily depend on the foreign exchange by trading in our local currencies,” he proposed.

Overall, the leader of the traders’ association stated that unless similar issues within the sub-regional body, ECOWAS are resolved, the efforts for a successful free continental trade may be significantly challenged.

“The challenges that we got from the sub-regional body like ECOWAS and those in, for example East Africa and Southern Africa, should be evaluated and addressed.”

he African Continental Free Trade Area has been instituted by member states within the African Union Commission to enable the creation of a single continental market for goods and services as they move freely within the continent.

The President  Nana Addo-Dankwa Akufo Addo on Monday 17th of August 2020  handed over the Secretariat of the AfCFTA to the African Union Commission in Accra.