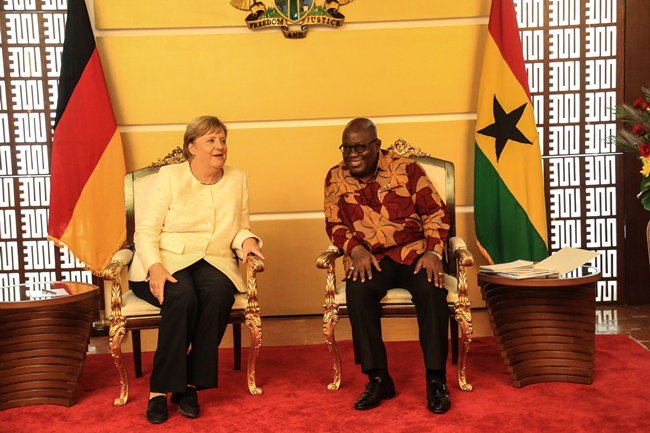 According to the President, an agreement between Volkswagen, the Government of Ghana, and a local Ghanaian company for the assembly, and, ultimately, the production of automobiles in Ghana has been reached, after a business meeting between officials from Ghana and a German business delegation.

The President disclosed this at a joint press briefing held as part of the official visit of the German Chancellor, Angela Merkel to Ghana, on Thursday, August 30, 2018, at the Jubilee House in Accra.

Addressing the press, which comprised the local and international media, President Akufo-Addo said, “there are so many areas that our bilateral relationship has offered us, but the key part of it for me is the emphasis on investment and trade corporation.”

He emphasized Ghana’s “determination to deal with the matters confronting our country such as youth employment, the desire of our youth to seek greener pastures elsewhere by improving the management of our national economy.”

President Akufo-Addo stressed that “The stronger the economy we have, the more opportunities it gives to the young people and obviously the pressure that will be on them to embark on those hazardous undertakings will be dealt with”.

He told the press that, “in so doing we’ve set for ourselves a vision of a Ghana Beyond Aid, a Ghana which will depend more and more on mobilizing its own internal resources to confront the issues of development that there are before us.”

In all of this, President Akufo-Addo indicated that “there are a lot of opportunities here, and we are hoping that this business delegation that you have brought with you will see the opportunities that there are in several of the flagship programmes of our government, the One-District-One-Factory, the industrial parks that we are determined to create.”

On the threat of terrorism, President Akufo-Addo thanked Chancellor Merkel and Germany for the assistance towards fighting this threat and the jihadist menace.