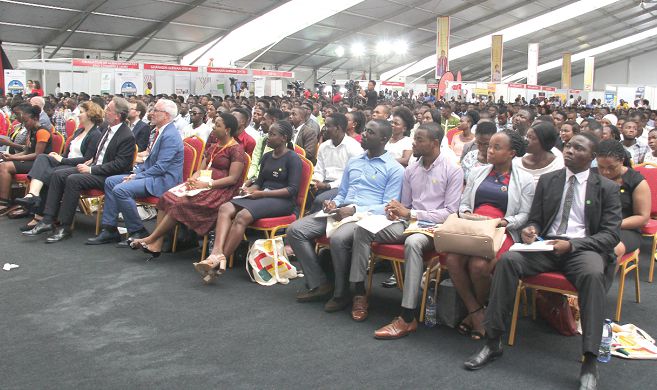 The second edition of the Ghana Job Fair has been organised in Accra with a call on job seekers to enhance their employable skills to meet the demands of employers in the job market.

The Ghanaian-German Centre (GGC) for Jobs, Migration and the Ghanaian-German Centre for Jobs, Migration and Reintegration, organised the one-day event last Thursday, in collaboration with the Ministry of Employment and Labour Relations, to bring job seekers and employers together for the common purpose of recruitment.
It was also undertaken with an agenda to help reduce unemployment in the country by providing an avenue for the youth to get sustainable jobs.

More than 1,500 job seekers patronised the event which offered the job seekers the opportunity to meet with employers for possible jobs.

Also more than 100 employers from different sectors were present at the event to search for their prospective employees.

Due to this, the job fair provided adequate measures such as a mock interview station where job seekers could go for initial interview testing as part of efforts to measure their preparedness prior to meeting an employer.

A curriculum vitae (CV) clinic was also set up where job seekers could get their credentials and certificates assessed and okayed before meeting up with employers.
There was a panel discussion to enlighten job seekers on the current trends in the job market and ways to access various job opportunities.

The Minister of Employment and Labour Relations, Mr Ignatius Baffour-Awuah, in a speech delivered on his behalf to mark the opening of the fair, described the initiative as laudable, saying it would serve as a catalyst towards creating more sustainable jobs in the country.

He said as part of efforts to deal with unemployment in the country, the government had resolved to liaise with its development partners in order to provide more jobs.

That way, he said, the involvement of the youth in activities such as illegal mining and migration would come to an end since more people would be engaged in decent jobs.

Mr Baffour-Awuah also expressed the hope that this year’s job fair would be an improvement on the maiden edition in 2018, where 100 job seekers were employed by corporate bodies after the event.

“This year, we are targeting that over 1,000 job seekers should find jobs after participating in this fair,” he said.

The German Ambassador to Ghana, Mr Christoph Retzlaff, in his remarks, said Germany attached a lot of importance to the growth of its development partners, including Ghana.

He said with youth unemployment being a major obstacle for many African countries, the German government, through the German Society for International Cooperation (GIZ) had partnered the Ministry of Employment and Labour Relations to help tackle the situation.

Mr Retzlaff commended the government for its Ghana Beyond Aid agenda and pledged Germany’s commitment towards its success.

The Regional Advisor of the Ghanaian-German Centre (GGC) for Jobs, Migration and Reintegration, Mr Benjamin Woesten, said the ultimate goal was to ensure that Ghana could ultimately organise job fairs without the support of its development partners, as envisaged in the Ghana Beyond Aid agenda.

He appealed to job seekers to work hard when given a job opportunity by an employer.

Some participants, whom the Daily Graphic spoke to, expressed satisfaction with the event.

The President of the National Beekeepers Association, Mr Richard Okoe, said the fair was not only a fine opportunity to employ competent young individuals, but also to advertise their goods and services.

Another job seeker, Ms Josephine Owusu Achiaw, described the job fair as a good initiative and urged that it be sustained.