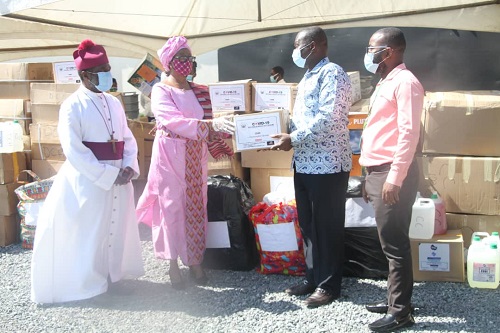 They were Nsawam Adoagyiri hospital, Tetteh Quashie hospital, and the Cardio Thoracic Centre, and Neonatal and Child Health Unit, both at the Korle-Bu Teaching hospital in Accra.

According to her, that was about half of the donations which was distributed to beneficiaries across the country.

Madam Akuffo made these known when she presented some Personal Protective Equipment (PPE) to some beneficiary institutions in the country today [Wednesday, August 5, 2020] in Accra.

The former Chief Justice assured the various beneficiary institutions that the Trust Fund will monitor and ensure that all items given them were put to good use.

The Minister of State in charge of State Interest and Governance Authority (SIGA), Mr Kwaku Afriyie commended all public health workers for their sacrifice and selflessness in the fight against the COVID-19 pandemic.

According to him, the pandemic has had a serious stern on all sectors of the economy with the health sector being badly hit.

Adding to that, Mr Afriyie expressed worry about the way some Ghanaians have disregarded the COVID-19 safety protocols.

He further noted that since the relaxation of the COVID-19 restrictions, some people have disregarded the practicing of some safety protocols, including practicing the social distancing, washing of hands under running water, and the wearing of nose mask.