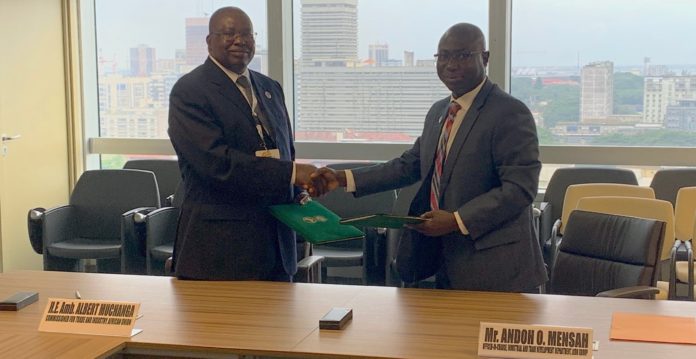 The grant, approved by the Group’s Board of Directors on 1 April 2019, forms part of a series of interventions by the Bank in its lead role to accelerate implementation of the Free Trade Agreement, seen as a major force for integrating the 55-nation continent and transforming its economy.

Albert Muchanga, AU’s Commissioner for Trade and Industry, initialled for the continental body; and Andoh O. Mensah, representing the Bank’s Director of the Industrial and Trade Development Department (PITD), signed on behalf of the Bank, signalling the start of implementation.

African leaders meeting at Niamey, Niger, in early July launched the implementation phase of the free trade area agreement established in March 2018, after it became operational at the end of May this year. Currently, 54 states have signed the deal and are set to begin formal trading next July.

“The AfCFTA is going to work, and we are confident that by the 1st of July next year, all the 55 countries will be state parties – meaning they would have signed and ratified the agreement and intra-African trading will start,” Muchanga said, and urged countries to use this period to complete the parliamentary processes.

Muchanga commended the Bank’s strong and consistent support to ensure smooth implementation of the Agreement, saying the grant will be used judiciously for the rollout of various protocols relating to the structure and mandate of the AfCFTA Secretariat.

The AU currently has an interim Secretariat, tasked to provide the organisational structure for the permanent administrative body, its work programme and related issues including its budget. The Niamey summit announced the AfCFTA Secretariat’s siting in Accra, Ghana.

The Continental Free Trade deal has the potential to create the largest free-trade area in the world.  – uniting 55 African countries with a combined gross domestic product of more than US$2.5trillion. It is a major force for continental integration and expansion of intra African trade, currently estimated at around 16%.

The trade agreement is expected to expand intra-African trade by up to US$35billion per year; ease movement of goods, services and people across the continent’s borders; and cut imports by US$10billion, while boosting agriculture and industrial exports by 7% and 5% respectively.

In his remarks, Andoh Mensah stressed that the deal will help stabilise African countries, allow small and medium-sized enterprises to flourish, promote industrialisation and lift millions out of poverty.

“If the AfCFTA is complemented by trade facilitation reforms, reduction in non-tariff barriers, improved infrastructure and policy measures to encourage employment and private sector investments. It will stimulate poverty reduction and socio-economic development across Africa,” he said, noting that the goals of AfCFTA are aligned to the Bank’s flagship High 5s.