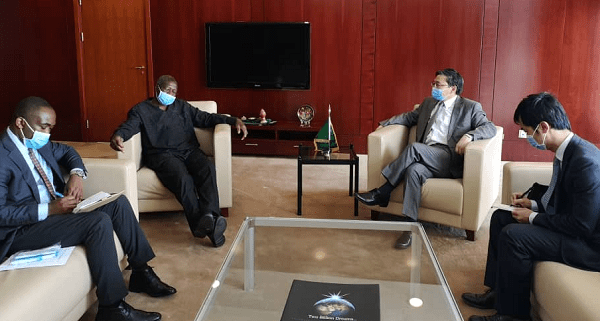 The African Union Commission (AU) has approved an emergency budget of $4.5 million for its Africa Centre for Disease Control and Prevention (Africa CDC) as an intervention for the coronavirus (COVID-19) pandemic for the continent.

The money is to be used to procure medical supplies to assist member states who as a result of the pandemic are facing economic hardship.

In an interview with the Daily Graphic, the Chairperson of the AU COVID-19 Task Force, Mr Kwesi Quartey explained that it had become necessary for the AU to assist member states to alleviate the expected economic disruption that will inevitably accompany the necessary lockdowns being implemented in some countries.

Of the number, 640 are said to have recovered, while some 313 people have succumbed to the disease and there are fears more people could die from the disease.

The Africa CDC, the technical health arm of the AU is projecting that by the end of April this year, deaths from the disease could peak marginally, especially in vulnerable communities across the continent.

After a meeting with the Chinese Ambassador to the AU, Mr Liu Yuxi, last Friday, Mr Quartey in an email correspondence with the Daily Graphic noted that whereas member states had established their own mechanisms to respond to the pandemic, the issues of economic disruption were of concern to the commission.

The meeting, he said, was also attended by the AU Commissioner for Social Affairs, Ms Amira El Fadil, the Deputy Director of Africa CDC, Dr Ahmed Ogwell, the Deputy Chief of Staff at the AU, Mr Niamke Benjamin Malan, and other officials of the AU and the Chinese Embassy in Ethiopia.

“One of the major effects of the outbreak of the COVID-19 pandemic is the massive disruption of the global supply chain which have seen full or partial lockdowns in many countries and had as a result affected the supply of medical consumables,” he said.

Consequently, he said, the comission, had been engaging China for an increase in bilateral collaboration to combat COVID-19 on the continent.

Mr Quartey, who also doubles as the Deputy Chairperson of the AU, said, the engagement was premised on the decisive manner in which the China is handling the outbreak of the pandemic.

He stressed that the meeting discussed how China could facilitate the procurement of the needed medical supplies for the continent as well as deepen cooperation in the area of public health to mitigate the socio-economic impact of COVID-19 on the continent and its people.

Engaging China at the continental level, he explained was to ensure that the continent negotiated well and got the appropriate medical supplies that were needed to ward off the disease.

The Africa CDC, through its Regional Collaboration Centres had before the first case was reported on the continent, trained health personnel in readiness for the pandemic.

Mr Quartey said further that, the AU under its newly operational AU COVID-19 Response Fund, would deploy some 500 rapid response team to all 55 member states to help train health personnel and volunteers towards containing the spread of COVID-19.

He emphasised that the commission was ready to work with all partners who are willing to help Africa, since the pandemic is a worldwide problem which could be tackled effectively is the united.

He said the Secretary General of the United Nations (UN) as well as the World Health Organisation, he said has provided very critical support to the commission.

“The African Private sector through the Afro Champions led by Gen Olusegun Obasanjo and Dr Edem Adzogbenu of the Afro-champions continue to play a very critical role in our coordination of efforts,” he said.