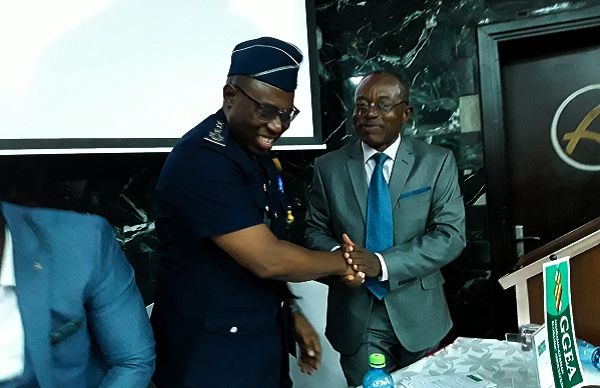 The Customs Division of the Ghana Revenue Authority (GRA) has said the use of the benchmark value to valuate imported goods at the country’s ports was to ensure that taxes are fairly paid to the State.

The benchmark value, the tax collection agency explained, was one out of the six approved valuation methods by the World Trade Organisation (WTO).

It also observed that the other methods, namely transactional value, value of identical goods, value of similar goods, computed method and deductive methods were applied sequentially in accordance with the law.

The Assistant Commissioner in charge of Customs Operations, Mr. Yakubu Seidu, indicated that the benchmark value which was properly identified by the WTO as the fall-back method was compatible with Ghana’s current nature of imports.

He was addressing a packed hall of business owners and executives at a forum organised by the Ghanaian-German Economic Association (GGEA) on April 10, 2019 at the Alisa Hotel in Accra.

Mr. Seidu debunked claims in the media that the WTO had outlawed the benchmark valuation method and for that reason Ghana risked being sanctioned.

“We are not going against WTO regulations by using the benchmark values because it permits the usage of six methods sequentially and we are applying them in accordance with the regulations.

“Once the transaction price of imported goods fails a method, we are required by the law to use other methods, and so because majority of goods are often compatible with the fall-back method, that is why it is frequently used,” he said.

On the new reductions with regard to benchmark valuation, the assistant commissioner explained that customs had already adjusted its systems to reflect the discount given by the government.

“So the government is saying that the home delivery value of an imported vehicle will be discounted first of all by 30 per cent and then based on the age of a vehicle, per the law, it will now start depreciating.

“If the vehicle is less than six months, it is considered a new vehicle and the true value will be applied but if it is above that, the value depreciates in stages,” he added.

The Deputy Minister of Trade and Industry, Mr. Carlos Kingsley Ahenkorah, in a speech read on his behalf by his Special Assistant, Mr. Michael Opoku, stated that the government was now building the capacity of small and medium enterprises (SMEs) to undertake big ticket projects.

“A strong SMEs sector is important for the growth of every economy, advanced or developing.

“In Ghana, more than 84 percent of all registered businesses fall in this category with a similar proportion of the industrial sector making it into the category,” he added.

The forum, which is an initiative of GGEA, is a series of dialogues that feature selected topics and is aimed at influencing government policies in favour of businesses.

It brought together players in the private sector, policy makers and people from the government to deliberate on the Ghanaian business environment.

On the theme: “The Ghanaian Business Environment Today”, the forum had speakers such as the President of GGEA, Mr. Stephen Antwi, and Head of Retail Banking at Access Bank Ghana, Mrs. Matilda Asante.

Other speakers were the Managing Director of Regimanuel Concrete Product, Mr Christian Braun, and the Head of Competence Centre, Private Sector Dev’t and Projects of the Delegation of German Industry and Commerce in Ghana, Mrs. Stefanie Simon.