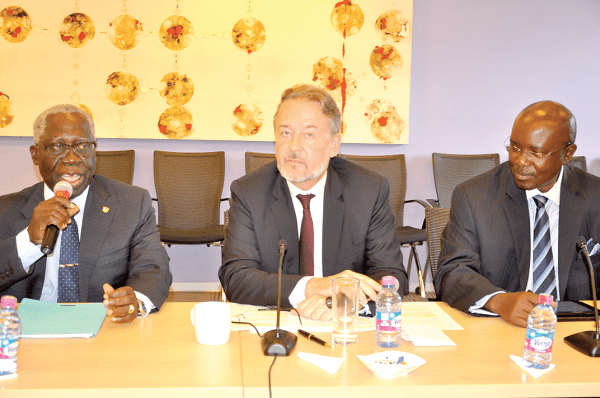 The government on Tuesday held a consultative meeting in Accra with the country’s development partners to seek their inputs to the draft Ghana Beyond Aid Charter and Strategy Document.

The charter aims to build a country less dependent on foreign aid, one that uses aid efficiently and which relates to its partners based on trade and not hand-outs.

Among others, Ghana’s development stakeholders used the two-hour closed-door meeting to discuss ways to support the government’s economic transformation agenda to build a prosperous country.

The participants also deliberated on issues such as the attitudes and mindset of Ghanaians that should be changed to help the country to implement the Ghana Beyond Aid strategy, which is expected to achieve its targets in 10 years from the year of implementation.

The meeting was attended by heads of foreign missions, development agencies, representatives of the Ghana Beyond Aid Committee, other government officials and civil society organisations.

The Senior Minister, Mr Yaw Osafo-Maafo, who is the Chairman of the committee, described the draft Ghana Beyond Aid document which had been given to foreign missions to study as “a work in progress” that needed to be fine-tuned with the inputs of key stakeholders.

He said the draft document was first given to Cabinet for its input, after which it was made available to the Council of State, the Constitutional body established to advise the Presidency.

The Senior Minister indicated that following Tuesday’s meeting with the foreign missions and development partners, the Ghana Beyond Aid Committee, set up by the President to develop the document, would meet the National House of Chiefs to elicit the inputs of members to the document.

He said that the meeting would be followed by another meeting with the national and international press for them to comment on the document.

Mr Yaw Osafo-Maafo explained that the Ghana Beyond Aid Agenda 2028 would help to shift the development paradigm of the country. “It will enable us to look at what we have done in the past, what we have, the results achieved, pass judgement on it and ask ourselves why are we at this stage of development despite all the excellent resources this country is endowed with,” he stressed.

He wondered why in spite of the abundant rich land, minerals, educated and youthful human resource the country was endowed with, Ghana continued to remain under-developed and blamed it partly on the negative mindset of the people.

“Our development paradigm is nothing to write home about but some of us believe that if things had been done correctly, Ghana should have been in a position today to be offering support and aid to other African countries who are not so well endowed with resources,” he added.

The Chairman of the Development Partners Group of the World Bank, Mr Christoph Retzlaff, commended the Ghana Beyond Aid Committee for setting out, what he described as, ambitious targets to phase out aid completely by 2028.

“The agenda 2028 set by the Ghana Beyond Aid Committee is focused on an economic transformation growth of 9.5 per cent average per year for the next 10 years and it also includes bringing the manufacturing sector from 12 per cent to an increased rate of 20 per cent on Gross Domestic Product (GDP),” he stated.

Mr Retzlaff, who is also the German Ambassador to Ghana, expressed optimism that the country had huge economic potential to achieve the 2028 agenda targets.