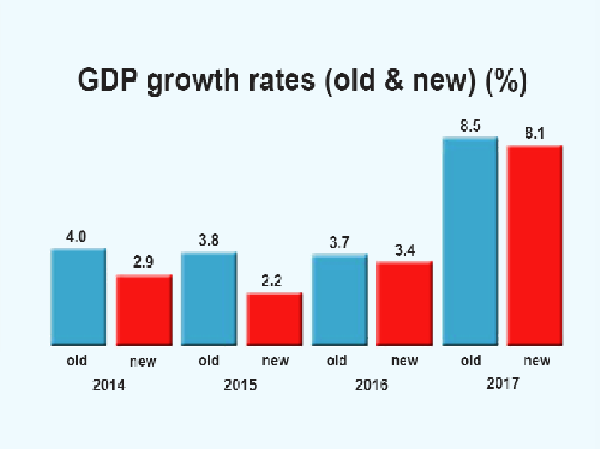 SOME Economists have advised the government to ignore any desire to borrow more following the rebasing of the economy which has provided some fiscal space for it to take on more debts.

The country’s economy is now valued at GH¢256.6 billion after the rebasing of gross domestic product (GDP) premised on measurements from 2013 instead of 2006.

With a bigger base in GDP, there appears to be a borrowing space now for the government as the rebasing is expected to reduce the country’s debt-to-GDP ratio to about 55 per cent from the current 65.9 per cent.

Speaking in separate interviews with the GRAPHIC BUSINESS, a Senior Research Fellow at the Institute of Economic Affairs (IEA), Professor Eric Osei-Assibey, an economic analyst with Databank Financial Services, Mr Courage Kwesi Boti, and a Research Associate at the Centre for Socio Economic Studies (CSS), Mr Seth Doe, all maintained that the rebasing should not be an impetus for fresh appetite to borrow more.

As a result of the rebasing, tax to GDP ratio is also expected to drop to about 12 per cent and the economists believed the government should rather focus on the revenue side than the borrowing side.

Prof. Osei-Assibey said the expanded GDP did not necessarily mean the country now had the ability to generate more revenue.

He said it was just statistical addition and not real resource addition to the economy.

“It we don’t take care it may present very misleading figures to us that we now have a bigger GDP base so we can go out there to borrow more,” he stated.

“We must be cautious and the rebasing must rather challenge us to do more to increase domestic revenue. If our economy has expanded that much and we are still not able to generate enough revenue then that is a cause for concern,” he noted.

“One would have expected that given the fact that the economy has expanded, revenues would have also increased but we are not seeing that,” he added.

He said the government, therefore, had to introduce more tax measures to address the revenue shortfalls.

“We borrow because we are not able to mobilise enough resources. We should be able to generate enough to finance our key activities. This is the only sustainable way,” he explained.

Should government decide to exploit the available fiscal space by borrowing more, Prof Osei-Assibey said it should be on favourable loans to finance long-term projects.

He said this should, however, be done while taking steps to increase tax payment compliance and expanding the tax base to make sure that every penny due government was collected.

He said this was the only way the country could generate enough to repay the loans.

We don’t pay debts with GDP

Mr Doe, for his part, said given the very low performance of revenue as against borrowing, government should focus on measures to improve revenue instead of taking advantage of the window to borrow more.

“We don’t pay debts with GDP; we pay debts with revenue so the government should focus on revenue mobilisation instead of using debt to GDP ratio as a window to borrow more,” he stated.

Mr Doe indicated that the country’s ability to repay its debts remained gloomy and any further borrowing on account of the artificial expansion would create debt overhang.

Mr Boti also pointed out that the rebasing did not reflect a productivity gain and would, therefore, not be prudent for the government to borrow more just because of the fiscal space.

“Let’s not get ahead of ourselves and start borrowing. We should rather prioritise bringing up our tax to GDP ratio to at least 16 to 20 per cent before we start exploiting the borrowing space,” he advised.

He said exploiting this mere statistical effect must be prudently measured against tax revenue to GDP ratio to ensure debt sustainability.

“We must exploit this borrowing space prudently,” he stated.

Mr Boti also indicated that the rebasing exercise had provided some information on the informal sector which the Ghana Revenue Authority (GRA) and the Ministry of Finance could pick up to rope in a lot more people into the tax net.