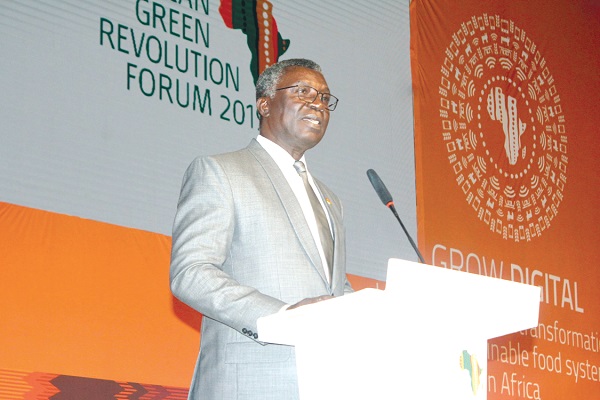 The Vice-President, Dr Mahamudu Bawumia, has called on African countries to take advantage of the opportunities offered by digital technology to deal with the challenges associated with age-old agricultural practices.

He expressed optimism that the adoption and application of digital technology would present yet another unique opportunity for Africa to leapfrog in its development efforts.

Dr Bawumia said this in a speech read on his behalf by the Minister of Environment, Science, Technology and Innovation, Professor Kwabena Frimpong-Boateng, at the opening of a four-day forum on Africa’s Green Revolution in Accra yesterday.

The African Green Revolution Forum (AGRF) is the brainchild of the late former United Nations (UN) Secretary General, Mr Kofi Annan, who introduced the Alliance for Green Revolution in Africa (AGRA), which metamorphosed into the AGRF.

This year’s conference, which marked the 10th edition since its inception, is being attended by 2,300 delegates from 79 countries across the globe.

It is on the theme: “Go digital: Leveraging digital transformation to drive sustainable food systems in Africa”.
Nine years ago, Ghana hosted the maiden edition of the forum in Accra

Dr Bawumia said “it is refreshing to note that already there are many African countries firmly on the path of digitisation and reaping the associated benefits”.

He mentioned Rwanda, South Africa, Mauritania, Mauritius and Senegal as some of the countries which were reaping from digital tools, e-commerce and revenue administration, with constant significant improvement in revenue growth and growth of small businesses.

He mentioned some challenges inhibiting the effective application of technology to include weak infrastructure and inadequate basic literacy and numeracy, the lack of stabilisation and compatibility of available technology, the high cost of smart phones and tablets equipped with the necessary applications, the absence of a national digital agricultural strategy and growing threats of cyber crime and insecurity.

Such challenges, the Vice-President said, highlighted the existing gaps in Africa’s digitisation efforts and underscored the need for a paradigm shift from manual systems to a regime of digitisation as an integral part of governments’ operating systems.

“We may have missed the opportunities provided by the Green Revolution in the past, but Africa cannot afford to do so this time in the area of leveraging technology to leapfrog and open up new opportunities for progress.

“The benefits of digitisation are all around us and the prospects that we can leverage technology application to provide solutions for old and age-old agricultural challenges give us hope that the collective vision in transforming Africa into an economic giant in the 21st century is attainable.

“Our optimism further stems from the fact that the adoption and application of digital technology are not limited to only a few sectors of the economy,” he added.

Highlighting some of the interventions made in the last two-and-a-half years by the government and their impact, Dr Bawumia said the implementation of a paperless port system had reduced clearing time and contributed to revenue mobilisation.

“The digital property address system has led to an exponential growth in e-commerce and service delivery because it is easy to find location. The national ID system has also led to de-risking lending and borrowing. There is also the use of drones in the distribution of urgent drug supply, as well as interoperable payment for electronic transfers and services,” he said.

The President of the AGRA, Dr Agnes Kalibata, paid tribute to the late Kofi Annan for promoting the agenda and expressed appreciation to the government for its immense support of its activities.

She said some of the subject areas to be discussed at this year’s meeting were digital revolution, the role of the private sector, partnerships, as well as how to take businesses on the continent to higher levels.

Also on the agenda, she said, were issues of climate change and food security and the political will on the part of leadership on the continent to put in place mitigating measures to contain the situation.

Dr Kalibata said there were many opportunities on the continent which, when properly harnessed, would bring prosperity and halt the migration of Africans to other countries.