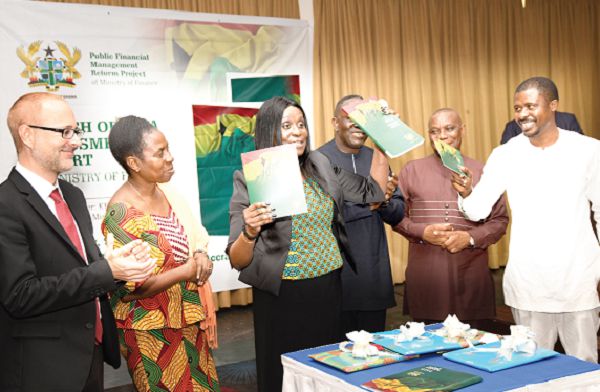 The Ministry of Finance has expressed its commitment to build a robust public financial management system to promote the economic development of the country.

“The report basically says that our current PFM is one of the best we can find anywhere in our part of the world.

It showed that for macro-fiscals and the way we do our fiscal forecasting and strategy, Ghana has moved from a D in 2016 to a B as we speak today and that is an achievement that is worth talking about.

“There are about 31 indicators and if you do a comparative analysis between 2016 and 2018 scores in this assessment, you will see a mile’s difference because there is much improvement,” he added.

According to him, the report had justified why Ghana’s PFM had become a showpiece for many other countries which came to the country to understudy the system.

“We used to have a huge challenge with ghost names on our payroll but this has been dealt with because of the rigorous system we have.

And the way we do our medium-term budget has drastically improved because we now have a programme-based budget with detailed information,” he said.

The director was speaking at the launch of the fourth PEFA Report which gives a comprehensive account of the use and protection of public funds in Accra last Friday.

It also provides new baselines for measuring the performance of the country’s Public Financial Management (PFM) framework to help address weaknesses in the system and also consolidate gains made through fiscal policies by the government.

It feeds on data from a previous PEFA in 2016, which hinged on seven key pillars: budget reliability, transparency of public finances, management of assets and liabilities, policy-based fiscal strategy and budgeting, predictability and control in budget execution, accounting and reporting, and external security and audit.

The Director-General of the National Development Planning Commission (NDPC), Dr Grace Afua Bediako, lauded the Ministry of Finance for the strategic fiscal policies aimed at enhancing the country’s PFM system.

She said the ministry had a critical role to play to help the government to achieve its agenda of developing the country beyond aid.

Dr Bediako said the operationalisation of the Public Financial Management Act, 2016 (Act 921) and regulations, extension of the GIFMIS to all metropolitan, municipal and district assemblies (MMDAs), and an audit management information systems were good initiatives that would improve management of public resources.

The Chairperson of the Public Services Commission (PSC), Mrs Janet Ampadu Fofie, said the PEFA Report must be used as a working document to achieve the targets set out in Ghana’s economic reform agenda.

The Deputy Head of Mission and Head of Cooperation at the Embassy of Switzerland in Ghana, Togo and Benin, Mr Matthias Feldmann, commended the government for the efforts being made to strengthen the PFM systems.

“Today’s launch of the PEFA Report is a call to action that the weaknesses in the PFM system need to be removed. There is an improvement in this PEFA as compared with the previous one but there is still more ahead,” he said.

Mr Feldmann, however, stated that a sound and robust PFM system was not an end in itself but could be the bedrock for achieving the Ghana Beyond Aid agenda because it would ensure that public resources were judiciously used for development.