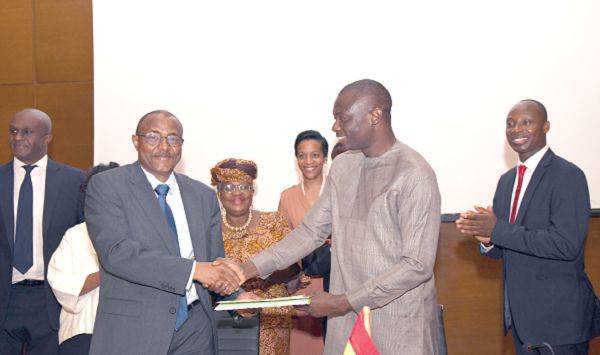 Ghana has signed a renewal agreement with the African Risk Capacity (ARC), a specialised agency of the African Union (AU), to improve responses to extreme weather outcomes and natural disasters.

The agreement will also pave the way for the country to purchase sovereign insurance for smallholder farmers in parts of the country, including the Northern, Upper East and Upper West regions and some parts of the former Brong Ahafo Region.

A Deputy Minister of Finance, Mr. Kwaku Agyeman Kwarteng, signed on behalf of Ghana, while the Chairperson of the ARC Governing Board, Dr. Ngozi Okonko-Iweala, signed for her outfit at a ceremony in Accra yesterday.

The ARC was established in July 2012 at an AU Summit following a decision taken by African Heads of State.

It is a continental risk pool designed to assist member states to strengthen their capacities to better plan, prepare and respond to extreme weather events and natural disasters, thereby achieving food security for their populations.

Ghana joined the ARC programme on January 28, 2016 by signing the Establishment Agreement, followed by the memorandum of understanding (MoU) in June the same year.

The MoU set out the terms and conditions under which the government of Ghana and the ARC would work together to address the impact of extreme weather events.

Ghana signed the first programme work plan in 2017 for a duration of two years.

Some of the benefits Ghana currently derives from its association with the ARC include timely release of funds to the country in the event of drought, climate change adaptation measures, prevention of food insecurity, among others.

In all, 34 AU member states have signed on to the ARC treaty.

Addressing the media after the signing ceremony, Mr. Kwarteng said Ghana signed the renewal agreement because it recognised its vulnerability with regard to climate risks and the challenges they presented for economic development.

“We are aware of the occurrences of seasonal flooding that affects our cities and agricultural activities, with its toll on life and property, as well as the erosion of our coastal communities,” he said.

Touching on some of the achievements Ghana had made since signing the first agreement with the ARC in 2017, he said the country had completed drought customisation, using the Africa Risk View, an insurance mechanism that objectively and rapidly triggered a pay-out support system for affected households of natural disasters.

Additionally, he said, Ghana was in the process of ratifying the establishment agreement to take advantage of the benefits of the ARC programmes.

Some of the benefits include a social safety net for the vulnerable, halting of rural-urban migration and bridging the poverty gap between the northern and the southern sectors.

For her part, Dr. Okonko-Iweala said in the four years that the agency had been operational, it had paid $36 million to four African countries following significant rainfall deficits in 2014, 2016 and 2017.

She said Ghana was currently piloting the ARC flood model, which would pave the way for the country to get insurance against river flooding in 2020.

Dr. Okonko-Iweala, therefore, called on the government of Ghana to join the ARC insurance risk pools which would not only allow the country to benefit from financial protection against drought for the 2019 agricultural season but also reinforce the Pan-Africanism and solidarity values.