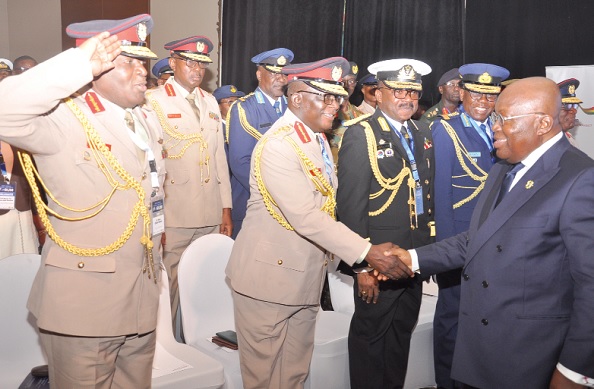 President Nana Addo Dankwa Akufo-Addo has said Ghana has adopted an integrated approach to ensure that it wards off the activities of terrorists and violent extremists, since the country is not immune to the growing terror attacks in the West African sub-region.

He mentioned some of the measures as the establishment of anti-terrorist intelligence and security bodies, the promotion of education with access to free secondary education for majority of the youth, the fostering of international collaborations, the deepening of religious tolerance and the promotion of peaceful coexistence between Christians and Muslims in the country.

President Akufo-Addo said this at the maiden Kofi Annan Peace and Security Forum in memory of Kofi Annan, who passed away last year.

“Despite being a beacon of peace, stability and democracy in a region that is plagued by the activities of terrorists and extremist groups, Ghana must know that it cannot be immune to terror attacks,” the President said.

The two-day international forum, which attracted former Presidents from the sub-region, heads of regional and international organisations and security experts, is on the theme: “Peace Operations in the Context of Violent Extremism in Africa”.

President Akufo-Addo said the fight against terrorism and violent extremism could not be limited only to military means, as vital as they were, but broader policies must also be put in place to create opportunities and jobs for the youth if the fight should be successful, with their root causes.

Recounting Ghana’s close encounter with terrorist and extremist groups, he said in 2015 agents of the so-called Islamic State recruited few adherents from the country’s university campuses to join the group in Libya and Syria, but they died in combat.

He added that the activities of terrorist and extremist groups in Ghana, for now, mainly took the form of fundraising activities by alleged charitable organisations to support extremist activities around the world and that last year the security agencies disrupted the activities of groups purporting to raise funds for Rohingya Muslims when, in fact, the funds were for terror-related activities.

President Akufo-Addo said endemic poverty and widespread disillusionment among the youth of Africa were not only making then cross the Sahara Desert on foot and the Mediterranean Sea in rickety boats in the hope of finding a better future in Europe but also made them available agents for terrorist and violent extremist groups.

He said additionally, the growing number of breakaway terror groups and the natural vulnerabilities, notably the spread of ethno-linguistic groups and the porous nature of borders, called for regional and continental approaches to contain the growing threats of those groups.

The President said 89 million young Africans of school age were not in school, a situation which must be arrested, adding that it was for that reason that Ghana had, since 2017, instituted a system of free secondary education which had increased enrolment by nearly 50 per cent.

“From this month when schools reopen, 1.2 million Ghanaian children will be beneficiaries of the free senior high school policy, the highest number of students in secondary schools in our history,” he added.

President Akufo-Addo noted that the cost of providing free secondary school education would be cheaper than the cost of the alternative — an uneducated and unskilled youthful workforce that had the capacity to stall development and pose a threat to the peace and stability of the nation.

He also called for the structural transformation of African economies, which was necessary because majority of the continent’s economies depended on the production and export of raw materials, saying it was not surprising that the youth wanted to leave in search of greener pastures elsewhere in economies that generated more jobs.

The UN Secretary-General’s Special Representative for West Africa and the Sahel, Dr Mohamed Ibn Chambas, said increasingly forces of peace operations were now adapting and reorienting their approaches to directly counter threats emanating from complex asymmetrical environments and it was being argued that peace operations now constituted the first line of defence against violent extremism.

He said peace operations played a critical role in furthering the peace and development nexus that was required to sustainably and holistically address the scourge, adding that a military approach would not guarantee long-term solutions.

That, Dr Chambas added, must be accompanied by the long-term responses that would address the structural causes of violent extremism.

The wife of the late Kofi Annan, Nane Maria Annan, called on policy makers to include youth and women in the discussions to ensure that their views and concerns were captured and implemented, adding that groups such as the youth formed a critical force in nipping in the bud the activities of violent extremism.