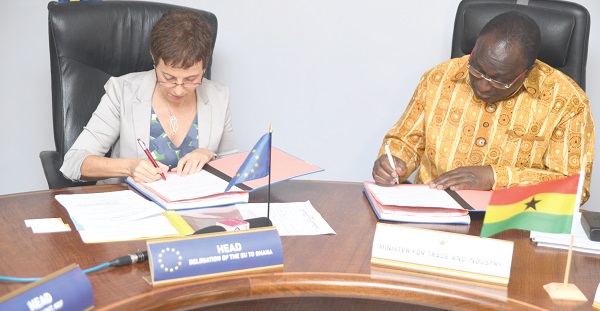 The European Union (EU) has signed a €4.1-million grant agreement with Ghana for the implementation of four projects targeted at improving the country’s competitiveness and export capacity on the international market.

The grant falls under the Interim Economic Partnership Agreement (IEPA) that was renewed between Ghana and the EU in 2016.

As part of the agreement, €2.98 million will be extended to the Ministry of Trade and Industry (MoTI) for technical assistance, in addition to a direct grant of €800,000.

The Ghana Export Promotion Authority (GEPA) and the Ghana Investments Promotion Centre (GIPC) will also receive €221,000 and €147,000, respectively, to support the development of fruit, cassava and cosmetic value chains.

At the signing ceremony in Accra yesterday, the Minister of Trade and Industry, Mr Alan Kyerematen, signed the grant documents on behalf of Ghana, while the EU Ambassador to Ghana, Mrs Diana Acconcia, signed on behalf of the EU, with the chief executive officers (CEOs) of the GEPA and the GIPC, Ms Afua Asabea Asare and Mr Yofi Grant, respectfully, also initialling for their institutions.

Present at the ceremony were a Deputy Minister of Trade and Industry, Mr Carlos Ahenkorah, and some officials of the Ministry of Finance.

Mr Kyerematen described the signing of the grant agreement for the four projects as a historic milestone in Ghana-EU economic relations, saying the projects would boost Ghana’s access to global markets significantly.

“As a government, this agreement is important because it will enable us to put in place the institutional framework that will help us take advantage of economic partnerships,” he said.

He said the grants offered Ghana the opportunity to diversify its portfolio of exports to the EU that were currently limited to agricultural commodities and, recently, oil.

“The government has embarked on a vigorous programme to industrialise and add value to the country’s exports, so this grant has come at the right time,” he said.

For her part, Mrs Acconcia said the grant was important, as it would improve Ghana’s trade relations with the EU and catalyse its access to international markets.

She stressed that Ghana had the potential to diversify its economy through value addition to export commodities to make them competitive on the global stage.

“This grant is coming at an opportune time when the African Continental Free Trade Area (AfCFTA) has now become a reality. And so we will do everything that we can to support capacity building at the MoTI, the GIPC and the GEPA for Ghana to take advantage of the market access that comes with it,” she said.

Ms Asare and Mr Grant both expressed appreciation to the EU for the support for their agencies and gave assurances that the funds would be put to good use.

Mr Grant said the GIPC would wok with the MoTI to leverage the IEPA grant by exploring global markets and making value addition to exports a priority.

Ms Asare said the grant would help the GEPA to explore opportunities in mango production.

Ghana signed the IEPA with the EU in 2007 and ratified it the following year. It was again renewed in August 2016 and ratified.

The main reason Ghana entered into the IEPA was to avoid trade disruptions, particularly for goods that were exported to Europe.

The agreement was also meant to ensure that there were laid down trade regulatory regimes that would support trade between Ghana and the EU.