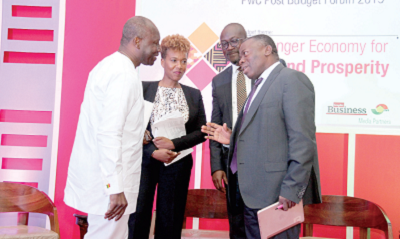 The Minister of Finance, Mr Ken Ofori-Atta, has given the strongest indication that the government will pursue stringent tax compliance measures to achieve its revenue target for 2019.

The determination to meet the total revenue estimates of GH¢58.9 billion, announced in the 2019 budget statement, will help the government meet its social contract with labour, execute its priority projects and fund its largest infrastructural programme since 2017.
Although a challenge, Mr Ofori-Atta said tax compliance strategies would be enforced to ensure that individuals and businesses fulfilled their tax obligations to the State. He also noted that the intended action of the government might create some discomfort for the people but noted that the move was inevitable.
“Companies and individuals must pay their taxes so we want them to pay. They should not wait for us to come at them before they pay.
It is an obligation they must fulfill and we will not relent in ensuring that they do what is expected of them.
“For instance, we will interrogate how people make their money and charge the right taxes. The property rates and all will be collected but I can assure you that we will put the money to the best use in fulfillment of our social contract with citizens.
“A big challenge for us is what we do with the Ghana Revenue Authority (GRA), so we will be working very actively with the Auditor General and the Special Prosecutor to enforce compliance,” he said at a post-budget forum organised by accounting, tax and audit consultancy firm PricewaterhouseCoopers (PwC) in Accra yesterday.
Mr. Ofori-Atta said enforcing tax compliance alone would help the government achieve its domestic revenue estimates of GH¢57.8 billion. Of the amount, non-oil tax revenue was expected to rake in about GH¢42.9 billion, reflecting the impact of expected improvement in tax compliance and reforms in revenue administration.
Mr. Ofori-Atta, who was addressing the business community from the various sectors of the economy to offer explanations on key issues highlighted in the 2019 budget, explained that compliance strategies such as border control with the use of drones and data room for monitoring, deploying 10,000 Nation Builders Corps (NaBCo) beneficiaries to join the GRA revenue enforcement force and a specialised audit team would be rolled out next year as part of the strategies to improve domestic revenue mobilisation.
“We have 10,000 NaBCo beneficiaries who are joining the GRA revenue force and, therefore, we are going to have programmes like border control with drones and data room where we can see what is happening everywhere and an audit team specialised to interrogate the numbers that we get.
“We are also going to reconstruct individual’s tax returns,” he said to a packed hall of business executives.
Paperless system
The Finance Minister noted that the paperless system introduced at the country’s two sea ports would be improved while the recently introduced Cargo Tracking Note (CTN) would be rigorously enforced to check trade mis-invoicing.
Expected revenues
Outlined in the 2019 budget statement, the total revenue and grants for 2019, estimated at GH¢58.9, is equivalent to 17.1 per cent of the rebased GDP.
It was also about 25.9 per cent higher than the GH¢46.8 billion estimated in the 2018 budget.
Non-tax revenue, excluding oil, would also amount to GH¢6.5 billion, while receipts from upstream petroleum activities were projected to fetch some GH¢5.4 billion in 2019, equivalent to 1.6 per cent of GDP.
Grant disbursements from development partners are estimated at GH¢1.1 billion, up from the projected outturn of GH¢773.2 million in 2018.
Meanwhile, an Associate Director at PwC, Mr Abeiku Gyan-Quansah, who also made a presentation at the forum, cautioned the government not to rescind on its decision to focus on tax compliance to boost domestic revenue mobilisation.
“We need to really focus on tax compliance; otherwise we may not be able to achieve that particular target,” he said.
He explained that although the government outlined in the 2018 budget certain plans to boost domestic revenue mobilisation, the audit firm could only score the government 50 per cent in terms of meeting those targets.
“The government outlined certain plans in the last budget but as far as PwC is concerned.
When it comes to the direct tax-related laws that ought to be passed, we are saying that the government has scored nine out of 10, but going through the indirect tax-related changes, five out of six, and finally in terms of tax administration measures, we have two out of four, which give the government about 50 per cent,” he said.
He, therefore, encouraged the government to apply alternative dispute resolution mechanisms to settle tax issues and focus a lot more on ensuring that modified taxation, which had been on the country’s law books since 2016, was implemented.
Decouple tax from budget
For his part, the Managing Director of Stanbic Bank, Mr Alhassan Andani, urged the government to separate the discussions about taxes from the annual budget to make room for a holistic discussion on tax obligations of individuals and companies.
He said compliance with tax obligations were part of the social contract between individuals and the State, “therefore, we must relook at how to separate the two conversations moving forward”, he told the GRAPHIC BUSINESS in an interview on the sidelines on the forum.
The Executive Director of CDD Ghana, Professor H. Kwesi Prempeh, for his part asked the government not to use the mid-year budget reviews to change the tax structure of the country.
According to him, companies and individuals planned for their annual activities using the tax measures announced at the beginning of every fiscal year and any changes midway affected their planning and threw their budgets out of gear.