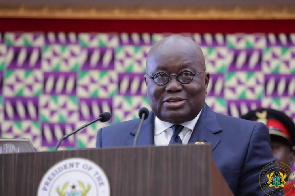 President Nana Addo Dankwa Akufo-Addo is urging Africans to join forces with the rest of the world to halt climate change in view of the fact that the continent’s environment and economies were the most susceptible to the effects of what he described as a destructive phenomenon.

He cautioned that since agriculture, water and energy were essential drivers of development on the continent and characteristically sensitive to changing climate, it required bold and concrete steps to protect global climate from warming beyond unreasonable limits.

“I call on all Africans to support and join in the fight against climate change; it is imperative that we join the call as enshrined in the Sustainable Development Goals (SDGs) to protect, restore and promote the sustainable use of terrestrial ecosystem, sustainable land forest, combat desertification and stop land degradation,” he urged.

President Akufo-Addo gave the charge when he addressed a high-level session of the ongoing five-day Africa Climate Week conference in Accra yesterday.

It was on the theme: “Climate in Africa: A race we can win.”

It was organised by the United Nations Framework Convention on Climate Change (UNFCCC), with the support of the Ministry of Environment, Science, Technology and Innovation and the Environmental Protection Agency (EPA).

The President noted that global warming had considerable impact on the fundamentals required for survival on earth and cited instances such as the rising sea levels, severe and extreme weather conditions, including droughts, floods, erratic rainfall patterns and growing desertification as some of the effects of climate change.

He stated that for Africans, the ravages of climate change affected the continent the most and that the week-long programme afforded an opportunity to showcase the progress that had been made in tackling the phenomenon, as well as deepening the partnership required at the global level to combat it.

President Akufo-Addo noted that a major concern confronting almost all developing nations was the need to streamline access to international climate finance to complement national funding to reduce carbon emissions on the African continent.

“While we strive to do our bit to halt impact of climate change at the national level, we expect also a lot on the international level; one major issue of concern to us is the need to streamline access to international climate finance to complement national funding,” he stated.

Meanwhile, he urged the participants to use the forum to come up with practicable ways to mobilise financial resources to support the implementation of their national climate actions.

“We must come up with practical solutions that will be beneficial to us in Africa and your solutions must resonate with the aspirations of our people and contribute to putting the world on a lasting sustainable development path,” he said.

With respect to Ghana, President Akufo-Addo told the gathering that the measures that had been put in place to deal with climate change were contained in the National Coordinated Programme of Economic and Social Policies (CPESDP) for 2017 to 2024.

He cited the Planting for Food and Jobs, One Village, One Dam, One District, One Factory (1D1F), as some interventions that were geared towards boosting industrialisation and rural development, as well as building the country’s resilience to the impact of climate change.

“The strategic focus on the 1D1F initiative in the northern regions is to provide all-year-round access to water to smallholder farmers to practically have alternative livelihoods during the dry season.

“We are also determined to make natural gas, which we have in abundance, available for the generation of electricity,” he said, and tasked the Ministries of Energy and Finance to come up with special incentives for the introduction of electric cars into the country.

The Minister of Environment, Science, Technology and Innovation, Professor Kwabena Frimpong-Boateng, said Ghana was implementing a number of climate change programmes, including the promotion of renewable energy, aimed at lowering deforestation and forest degradation, as well as pursuing low carbon electricity, building resilience and investing in sea defence walls.

The Deputy Executive Secretary of the UNFCC, Mr Ovals Sarmad, said in February this year, 17 heads of state from the Sahel-Region approved an investment plan worth $400 billion to support the fight against climate change over the next 12 years.

“This plan reflects the commitments of African countries under the Paris Agreement and it is this kind of commitment that we must see across the region and the world as a whole,” he said.

For his part, the President of the Conference of Parties (COP) 24, Mr Michael Kurtyka, urged African nations to step up their actions to combat climate change to enable them to fulfil their obligations under the Paris Agreement.