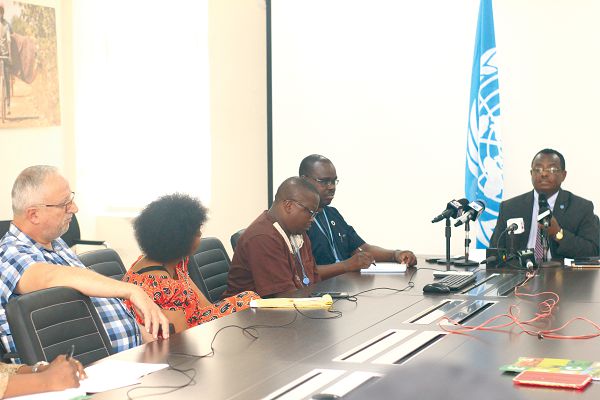 While commending the programme for the increase in food production in the country, resulting in surpluses at the market and the farm gates, it called for a coordinated effort to enable it to achieve its intended purpose.

“It should be addressed in a comprehensive manner, otherwise we are going to run into the same cycle.

You will boost production and end up producing more and you don’t know what to do with it,” the Assistant Director-General and Regional Representative for Africa of the FAO, Dr Abebe Haile-Gabriel, said while briefing journalists in Accra yesterday.

The briefing was on the state of food security and malnutrition in Africa and what needed to be done to address those issues.

Specifically, Dr Haile-Gabriel said Planting for Food and Jobs, as an agricultural development campaign, should be the agenda of the ministers of Agriculture, Trade and Industry, Finance and other ministries.

He outlined some of the causes of food insecurity in Africa to include the low level of food productivity, little or lack of value addition, a huge food deficit resulting in food importation and a high degree of vulnerability on the continent.

To ensure that the toils of the farmer did not go waste as a result of post-harvest losses, Dr Haile-Gabriel said the programme must be linked to an agro-industrial development strategy, such that produce from the farms could serve as raw materials for industry.

He said the important thing was how to attract the private sector to be interested and invest in the agricultural sector, especially in agribusiness, in order to make use of agricultural produce and also create jobs for the youth.

“In fact, that is the beginning of the whole process. Most of the money is in the agribusiness and agro industry area. Most of the opportunities for employment are not in the land clearing or weeding,” he said.

On how to get the youth interested in agriculture, Dr Haile-Gabriel said farming should be conducted and managed as business and there should be programmes and policies that would attract the youth into farming.

He said Africa had an aged population in agriculture and there was the need to get the youth into that sector, while the continent also needed to correct the wrong perception that pertains to agriculture which began at the land preparation level and ended at harvest.

Dr Haile-Gabriel talked about huge post-harvest losses in Africa and expressed the conviction that agro-processing was the best way to address the situation.

He said currently 230 million tonnes of food and food products were lost through waste and post-harvest losses annually in sub-Saharan Africa and emphasised that an increase in investment in agribusiness would address the situation.

Answering a question on what the FAO was doing to support Ghana and Africa tackle the menace of the Fall Army Worm, Dr Haile-Gabriel said the FAO had been providing funds/technical cooperation by mobilising partnerships, donors and research institutions to ensure that more than 26 African countries affected by the worms were provided with support to manage the infestation.

He said what African countries needed to do was empower farmers to be at the centre of managing the pests, adding that the FAO had developed an App for farmers to detect whether a worm on their farms was a Fall Amy Worm for immediate attention.