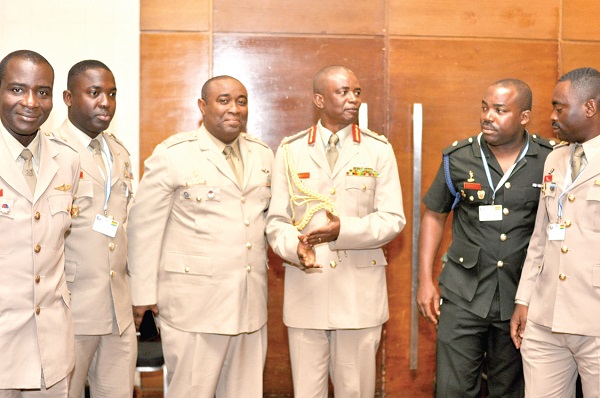 The Minister of National Security, Mr Albert Kan-Dapaah, has urged the military in Africa to deepen collaboration in the area of information and communication technology (ICT) to tackle all forms of insecurity on the continent.

He observed that the increasing complexity of crime on the continent and the world at large required the building of interoperable systems driven by technology to boost communication on security.

“Technology must continue to take centre stage in our efforts to achieve seamless information sharing, speedy processes and collaboration among stakeholders, and the military in Africa will play a significant role in this by teaming up with industry to fashion smart solutions to security challenges,” he stressed.

Mr Kan-Dapaah stated this at the opening of ‘Africa Endeavour,’ a military ICT symposium on multinational communication interoperability and warfare, in Accra yesterday.

The five-day symposium is a senior ICT leadership programme co-hosted by the Ghana Armed Forces (GAF) in partnership with the United States Africa Command (AFRICOM).

It is focused on African Union and United Nations (UN) mandated peacekeeping and disaster response missions, and is aimed at developing the strategic communication capability of the African Union, regional economic communities and countries contributing troops in peace support operations.

This year’s symposium, which is the third to be hosted by Ghana, is being attended by 160 delegates and participants from 43 African countries and exhibitors from top defence ICT solution providers from the United States (US) and European organisations.

‘Africa Endeavour’ is intended to build the capacity of the military in Africa in the areas of command, control, communication and ICT.

Mr Kan-Dapaah said the symposium was relevant, especially when countries over the world were moving towards digitisation of government services, including the security sector.

He said in Ghana, the government’s efforts to create a digital economy was all-encompassing and required that information systems of security agencies were beefed up.

The minister asked the participants to pay particular attention to innovative ways of building critical national information infrastructure and sustained exploitation of cyber and electromagnetic domains for national development.

Earlier at a joint press conference, the Chief of the Defence Staff, Lt Gen. Obed Boamah Akwa, and the AFRICOM Chief of Staff, Maj. Gen. Todd B. McCaffrey, expressed their commitment to deepen collaborations to improve security on the continent.

He said the GAF would continue to focus on programmes to build the capacity of military officers in the use of modern ICT tools to fight crime and boost the country’s security.

For his part, Major Gen. McCaffrey said the US would bring her expertise to bear to help build the capacity of the military in Africa in matters of security through the use of ICT.